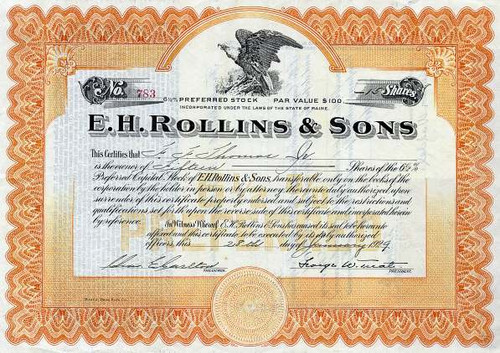 Beautifully engraved certificate from E.H. Rollins and Sons issued in 1929. This historic document was printed by the Boston Bank Note Company and has an ornate border around it with a vignette of an eagle perched on rocks. This item is hand signed by the Company's President and Treasurer and is over 76 years old. 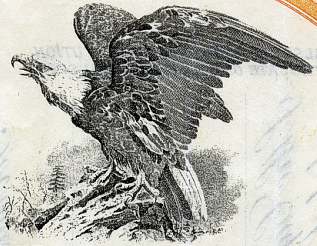 Certificate Vignette
ROLLINS, Edward Henry, a Representative and a Senator from New Hampshire; born in Somersworth (Rollinsford), Strafford County, N.H., October 3, 1824; attended the common schools and academies in Dover, N.H., and South Berwick, Maine; engaged in mercantile pursuits at Concord, N.H.; member, State house of representatives 1855-1857, and served as speaker; elected as a Republican to the Thirty-seventh, Thirty-eighth, and Thirty-ninth Congresses (March 4, 1861-March 3, 1867); was not a candidate for renomination in 1866; chairman, Committee on Accounts (Thirty-eighth and Thirty-ninth Congresses); secretary and treasurer of the Union Pacific Railroad Co.; elected in 1876 as a Republican to the United States Senate and served from March 4, 1877, to March 3, 1883; unsuccessful candidate for reelection; chairman, Committee on Manufactures (Forty-fifth Congress), Committee on Enrolled Bills (Forty-seventh Congress), Committee on Public Buildings and Grounds (Forty-seventh Congress); president of the Boston, Concord & Montreal Railroad Co. 1886-1889; founder of the First National Bank of Concord, N.H., and of the banking house of E. H. Rollins & Sons, of Boston, Mass.; died on Isle of Shoals, N.H., July 31, 1889; interment in Blossom Hill Cemetery, Concord, N.H.

Universal Light and Power Company - Made out to E.H. Rollins and Sons