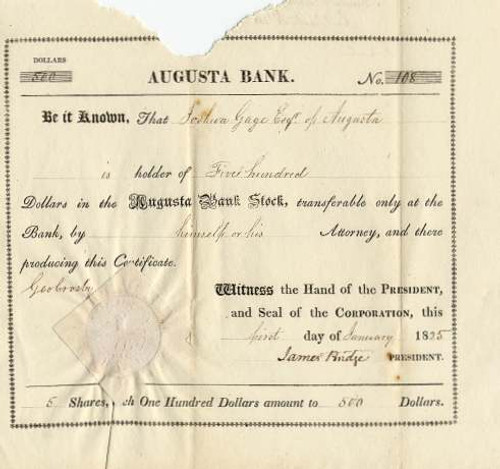 Beautifully printed certificate from the Augusta Bank issued in 1825. This historic document is hand signed by the Company's President ( James Bridge ) and is over 182 years old. The certificate was issued to Joshua Gage, Esq. Cancellation cut on top otherwise EF. James Bridge was one of the Commissioners to divide up the land of Maine between the Ste of maine and massachusettes. The joint commission, prescribed by the Act of Separation, was filled thus: Massachusetts appointed Timothy Bigelow and Levi Lincoln; Maine, Benjamin Porter and James Bridge; and these four chose Silas Holman and Lathrop Lewis to complete the board. From October 30, 1820, to November 27, 1827, the Commissioners held twelve formal meetings, eight in Boston, three in Portland, and one in Bangor and Augusta. They made exhaustive surveys of the public lands and divided the same, in accordance with the terms of the act, one-half to the Commonwealth of Massachusetts and one-half to the State of Maine. They also adjusted all personal property owned in common, giving two-thirds to Massachusetts and one-third to Maine, and made new treaties with the Indians.