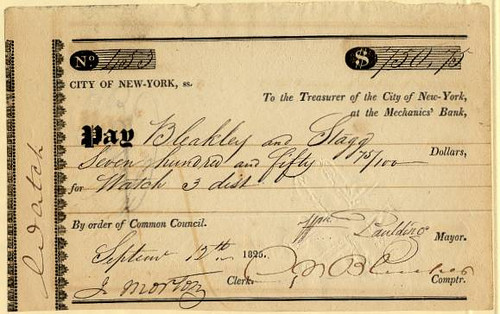 Beautiful check from the City of New-York, ss. This historic document has an ornate border around it with the signature of the Mayor, William Paulding, Jr.. This also has the signatures of the City Clerk and Comptroller, and is over 185 years old.

Mayor's Signature
William Paulding, Jr. (March 7, 1770 - February 11, 1854) was a United States Representative from New York and a Mayor of New York City. Born in Philipsburgh (now Tarrytown), Westchester County, he completed preparatory studies, studied law, was admitted to the bar and commenced practice in New York. He was elected as a Democratic-Republican to the Twelfth Congress, holding office from March 4, 1811 to March 3, 1813 and was a brigadier general of militia. He served in the War of 1812 and was a delegate to the New York constitutional convention in 1821. Paulding was adjutant general of the State of New York and, from 1824 to 1826, mayor of New York City. He died in Tarrytown in 1854; interment was in the Old Dutch Burying Ground at Sleepy Hollow, Tarrytown. Paulding was a cousin of Revolutionary war hero John Paulding, one of the captors of Major John AndrÃ©. Paulding Avenue in the Morris Park section of The Bronx is named after him. History from Encyberpedia and OldCompany.com (old stock certificate research service)