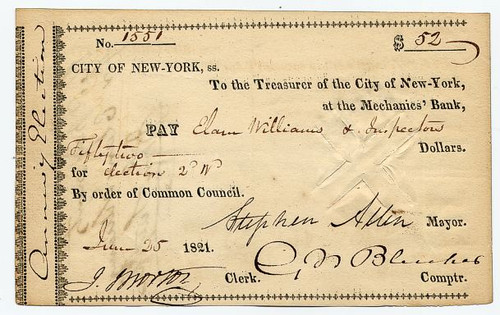 Beautiful check from the City of New York issued in 1821 signed by Mayor Stephen Allen . This item is over 189 years old. Stephen Allen (July 2, 1767 July 28, 1852) was the Mayor of New York from for three terms from December 1821 through 1824. Under the new constitution the Mayor was appointed by the Common Council, as opposed to the governor, leading to Allen being the first elected Mayor. Feb 1824 Allen declined a directorship on New York and Sharon Canal Company in February 1824. Allen lived in 1 Washington Square North after 1835. He died in the Henry Clay Steamboat disaster on July 28, 1852 in Riverdale, Bronx and is buried in the New York City Marble Cemetery.