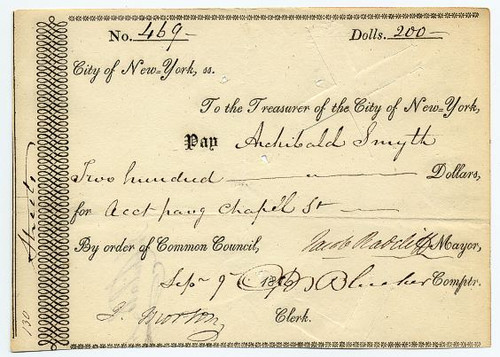 Payment to Archibald Smyth from the City of New York issued in 1816. This item is over 193 years old. This item is signed by the New York City Mayor, Jacob Radcliff and is over 186 years old. Jacob Radcliff was the fifth man to serve as NYC mayor during Newgate's operation. He is credited with helping found Jersey City as a partner in a real estate venture at Paulus Hook . Jacob Radcliff was Mayor of New York City from 1810-1811 and 1815-1818. Jacob Radcliff, an associate of Alexander Hamilton and a former justice of the New York Supreme Court whose lasting claim of fame would be as a founding father of the city of Jersey City, New Jersey. This "original" little municipality called Jersey City grew out of the area known as Powles or Paulus Hook, a tract of solid land jutting out into the Hudson River, bounded by Harsimus Cove on the north and south cove or Communipaw Bay on the south, and separated from the marsh land on the west by a creek that had been enlarged about 20 feet in width, large enough for ordinary boats to pass. Warren Street was roughly its western boundary. This area was purchased from the Dutch West India Company by Abraham Planck. In 1698, it was purchased from Planck by Cornelius Van Vorst. In 1804 Anthony Dey, a prominent New York lawyer, acquired it and soon thereafter passed title to Abraham Varick, also a prominent New Yorker, who the following day conveyed the area to Col. Richard Varick (a former Mayor of New York who had been General Washington's aide-de-camp in the American Revolution), Jacob Radcliff (a former Mayor of New York) and Anthony Dey (a wealthy New York lawyer and cousin of Col. Varick). These three were the leaders of The Associates of the Jersey Company, whose charter was drafted by Alexander Hamilton. For fifteen years it possessed the government and shaped the destiny of the infant community.