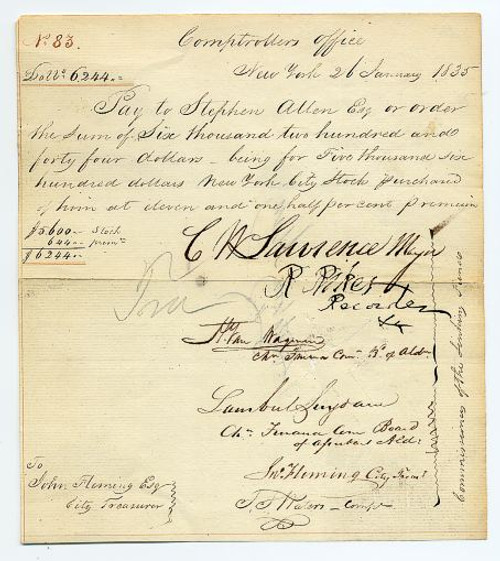 Payment to Stephen Allen from the Comptroller Office of New York issued in 1835 for New York City Stock Purchased. This item is over 174 years old and is signed by the New York City Mayor, Cornelius W. Lawrence and former Mayor, Stephen Allen (signed on verso). Cornelius Van Wyck Lawrence (February 28, 1791 February 20, 1861) was a politician from New York. He became the first popularly elected Mayor of New York after the law was changed in 1834. Born in Flushing, New York, Lawrence attended the common schools. Moving to New York in 1812, he engaged in mercantile pursuits Lawrence was elected as a Jacksonian to the Twenty-third Congress, serving from March 4, 1833, to May 14, 1834, when he resigned, becoming mayor of New York(1834-1837). He also served as director in several banks and trust companies and Collector of the Port of New York (1845-1849). Lawrence died in Flushing on February 20, 1861. He was interred in the family burying ground in Bayside, New York. Stephen Allen (July 2, 1767 July 28, 1852) was the Mayor of New York from for three terms from December 1821 through 1824. Under the new constitution the Mayor was appointed by the Common Council, as opposed to the governor, leading to Allen being the first elected Mayor.[2][3] Feb 1824 Allen declined a directorship on New York and Sharon Canal Company in February 1824.[2] Allen lived in 1 Washington Square North after 1835.[4] He died in the Henry Clay Steamboat disaster on July 28, 1852 in Riverdale, Bronx and is buried in the New York City Marble Cemetery