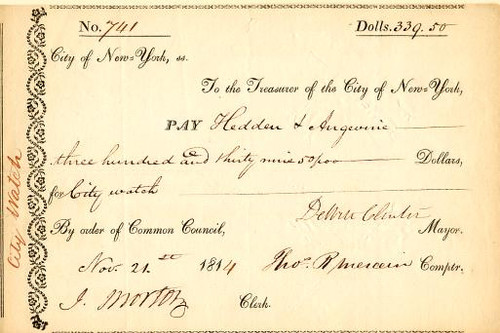 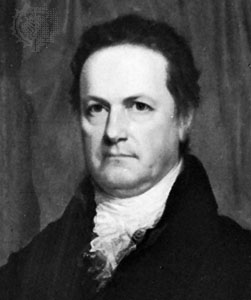 Oil painting by John Wesley Jarvis in the National Portrait Gallery
DeWitt Clinton was the nephew of Governor George Clinton of New York. A Republican (Jeffersonian) attorney, he served as state senator (1798-1802, 1806-11), U.S. senator (1802-03), mayor of New York City (1803-15 except for two annual terms), and lieutenant governor (1811-13). As mayor of New York City, he advocated free and widespread public education, promoted legislation that removed voting restrictions against Roman Catholics, and established various public-welfare institutions in the city. He was an unsuccessful presidential candidate in 1812, being defeated by James Madison. DeWitt Clinton was born in Little Britain, New York, and was educated at Columbia College. Three years after graduating form his college in 1786, Clinton was admitted to the bar and became secretary to his uncle, George Clinton, who was the governor of New York. He was a member of the Anti-Federalist party. In 1812, he ran unsuccessfully for the U.S. presidency against James Madison. One of Clinton's most lasting accomplishments as a leader in civic and state affairs was the establishment of the New York public school system; actively interested in all scientific and social questions, he encouraged steam navigation, modified the laws governing criminals and debtors, and advocated the building of the Erie Canal. On the strength of the canal question, which he had made a political issue, Clinton was elected as governor of New York, serving from 1817 to 1823. In the first year of his third term, he opened the canal at Rome, New York for navigation, breaking ground. Elected governor at this opportune time and serving almost continuously (1817-23, 1825-28) until his death, he was in a position to oversee the entire project. As bitter opposition to his administration developed under Martin Van Buren and Tammany Hall, Clinton refused to run for a third term in 1822. But his dismissal as canal commissioner in 1824 caused such indignation statewide that he was swept into the governorship the next year and served until his death. With the opening of the Erie Canal on Oct. 25, 1825, Clinton assured the 19th-century development of New York City as the major port of trade with the Midwest. Clinton was also very interested in the arts and the natural sciences, and he published an excellent summary of the state of scientific knowledge in the United States in a work entitled An Introductory Discourse (1814).