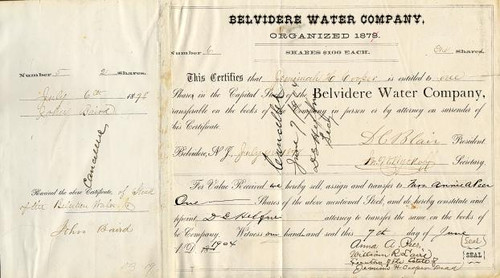 Beautiful certificate from the Belvidere Water Company issued in 1904. This item has the signatures of the Company's President, DeWitt Clinton Blair and Secretary, Jno. Whckoff and is over 103 years old. DeWitt Clinton Blair was the son of John Insley Blair, a railroad builder, financier, philanthropist, and the man for whom Blairstown, New Jersey was named. DeWitt Clinton was a noted lawyer, the president of the Belvidere Bank, and the president of the Belvidere Water Company. DeWitt Clinton Blair graduated from Princeton University with the Class of 1856. He served as a Princeton trustee (1900-1909) and expanded Blair Hall to its current proportions in 1907. He was instrumental in expanding the campus and buildings (Insley, East and Locke) of Blair Presbyterian Academy. On 21 April 1864 he married Mary Ann Kimball (1832)-(1911) with whom he had two sons Clinton Ledyard and James Insley. DeWitt Clinton Blair died on 12 February 1914; he was 80 years old. Blair Hall - Princeton University Blair Hall, the University's first collegiate Gothic dormitory, was a Sesquicentennial gift of John Insley Blair (1802-1899), a trustee of Princeton from 1866 to 1899. As a boy in Warren County, New Jersey, Blair left school at age eleven to work in a country store. At eighteen he owned his own store, at twenty-seven he was operating a chain of five general stores and four large flour mills. He next acquired an interest in the iron mines at Oxford Furnace and helped found the Lackawanna Coal & Iron Company. He then helped organize the Delaware, Lackawanna & Western Railroad and later, the Union Pacific Railroad. At one time he was president of sixteen railroads and was reputed to own more miles of railroad right-of-way than any other man in the world. In 1864 he endowed the professorship of geology then held by Arnold Guyot; it is Princeton's second oldest endowed chair. Asked for a few remarks after his installation as a trustee in 1866, he reminded the Board that his own formal education was limited; he had spent most of his life learning addition and now, he said, ``I have come to Princeton to learn subtraction.'' He gave the funds for Blair Hall in 1896; it was built in 1897. He did other exercises lies subtraction in favor of Blair Academy in Blairstown, N.J., and of the Presbyterian Church, making gifts of land and money toward the building of more than a hundred churches in towns he had helped lay out along the route of the Union Pacific and other western railroads. Blair Hall was designed by Cope and Stewardson, who were among the first to apply the Tudor Gothic style to American college dormitories. Blair Hall is considered their masterpiece. In 1907 Blair's son, DeWitt Clinton Blair 1856, who was also a trustee 1900-1909, gave the extension of Blair Hall that terminates in a gateway tower on University Place. When first built, Blair, Little, and the Gymnasium marked the western boundary of the campus. Originally the Pennsylvania Railroad tracks came to the foot of the broad steps leading up to Blair Arch, which served as the entrance to the campus for visitors arriving by train. This was a convenience for most people but a mixed blessing for students living in Blair; the puffing engine parked below often kept them awake and the soot from its smokestack blew into their rooms. In 1918 the railroad station near the foot of the steps was moved a quarter of a mile to the south and the intervening tracks taken up, making way for the post-World War I dormitory development that Blair Tower now overlooks.