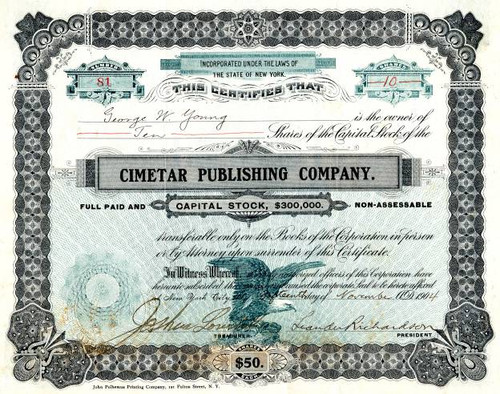 Beautifully engraved certificate from the Cimetar Publishing Company issued in 1904. This historic document was printed by the John Polhemus Printing Company and has an ornate border around it with a vignette of an eagle. This item has the hand signed signatures of the Company's President, Leander Richardson, and Treasurer, and is over 107 years old. 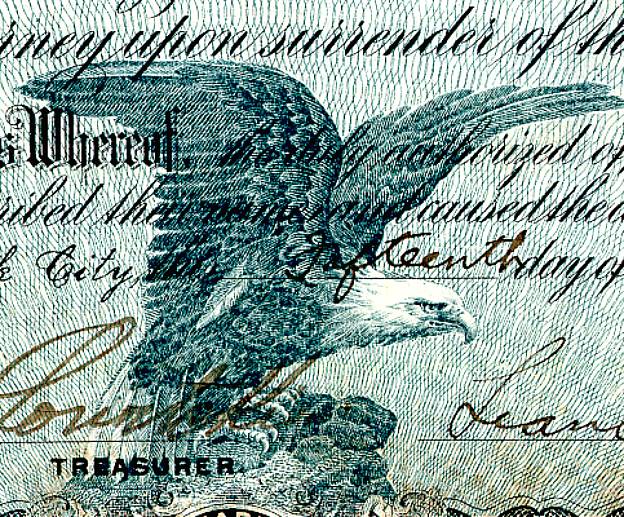 Certificate Vignette
Leander Richardson, playwright and theatrical writer, and once a member of the staff of THE NEW YORK TIMES, died of pneumonia yesterday at his home at 130 West Forty-seventh Street. He was born in Cincinnati, Ohio, Feb. 28, 1856. Literary News 1886 Leander Richardson wrote the book "The Dark City Or Customs Of The Cockneys" . Doyle & W. 12° $1; pap , 50c. "Mr. Leander Richardson has produced a lively and readable volume, recording his impressions of London during his residence there as a correspondent of several American newspapers. He writes with amazing candor, and sometimes, perhaps, at the expense of the literal truth, or without sufficient knowledge of his subject; but this may be attributed to an inability always to control his satirical or humorous propensities. He is too genuine an American to take kindly always to English institutions, habits, or manners, and is evidently not in love with London or any other part of England. At the same time he does full jutsice to what he has seen in that country which is worthy of imitation at home. His account of a debate in Parliament is a clever piece of writing, and we do not remember to have seen a better description of the appearance and manner of Mr. Gladstone."--N. Y. Suit. The Sunday Mercury (18391896) (sometimes referred to as the New York Sunday Mercury) was a weekly Sunday newspaper published in New York City that grew to become the highest-circulation weekly newspaper in the United States at its peak. It was known for publishing and popularizing the work of many notable 19th century writers including Charles Farrar Browne and Robert Henry Newell, and was the first Eastern paper to publish Mark Twain. It was also the first newspaper to provide regular coverage of baseball, and was popular for the extensive war correspondence from soldiers it published during the Civil War. By end of 1896, the operations of the Mercury were taken over and redubbed the New York Morning Telegraph, focusing on sporting (especially horse racing) and theatrical news and hired Leander Richardson as managing editor, and put it out as a daily sporting and theatrical newspaper. Research by OldCompany.com (old stock certificate research service).