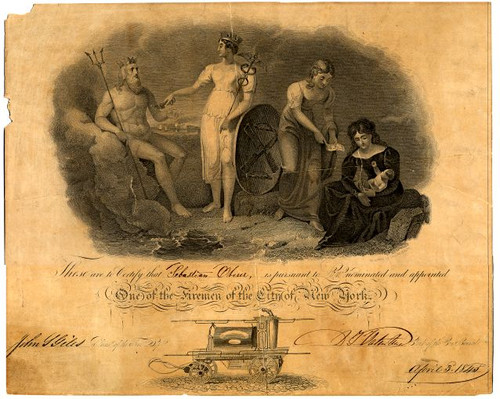 Beautiful Fireman Appointment certificate of Sebastian Oberer from the City of New York issued in 1845. This historic document was engraved by Geo. W. Hatch and has two vignettes. The top vignette shows a woman wearing a crown handing King Neptune 2 keys and another woman handing a mother holding her childing a contribution to the Fire Department Fund. The bottom vignette shows an early fire water wagon and hose. This item has the signatures of the Treasurer of the Fire Department, John S. Giles,Esq. and the Clerk of the Common Council, David T. Valentine. Shows signs of wear but would look terrific framed. 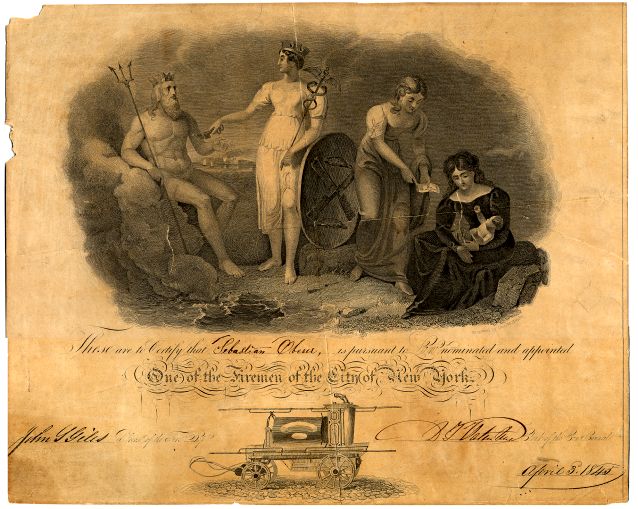 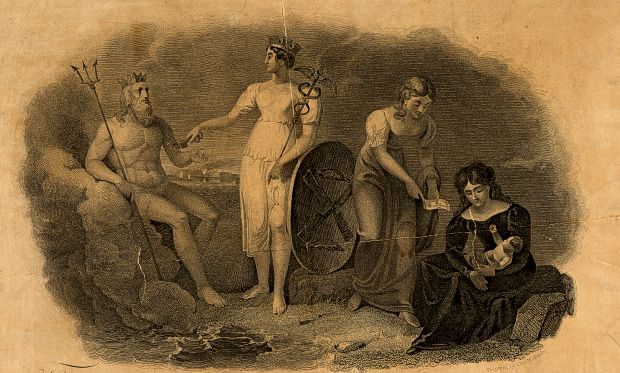 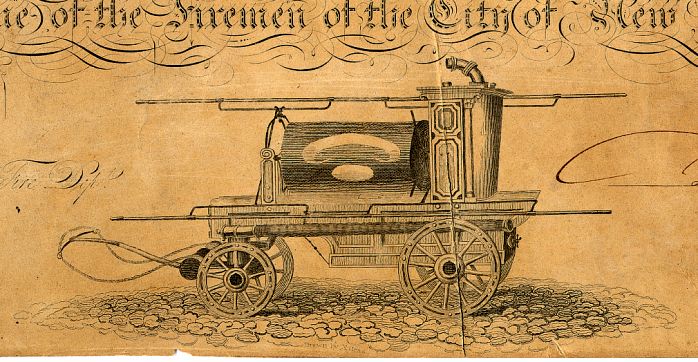 BottomVignette
TO THE MEMORY OF William Durand Wade, BORN JANUARY 18, 1826; DIED JANUARY 11, 1856. Aged twenty-nine Years, Eleven Months, Twenty-one Days. This tablet is erected by the Fire Department of the city of New York, of which he Was president at the time of his death, a graceful tribute to his faithful and devoted attention to its usefulness and prosperity. JOHN S. GILES, for many years treasurer of the old Department, was born in 1799. As a lad he ran with the engines. At the age of twelve he went to sea and made two voyages before the mast to India. When but fifteen years of age he was apprenticed to a builder and worked with such a will that two years later he was able to start in business on his own account. He had scarcely done so when he was burned out, and, being uninsured, lost every penny he had in the world. Nothing daunted, he set to work again as a journeyman and wrought with untiring energy at his trade until his thirty-second year, when by great self-denial he has accumulated fund sufficient to pay off all the indebtedness due at the time of his misfortune and leave a balance sufficient to re-establish himself on his own account. From that time his affairs prospered greatly, and at the time of his death, at the age of eight years, he was in the possession of an independent fortune. Mr. Giles was one of the organizers of Hose Company No. 14. In the year 1849 he rendered invaluable services in securing the passage by the legislature of an act requiring all fire insurance companies, organized outside the state of New York, to pay to the treasurer of the fund of the Fire Department two per cent of the amount received for premiums. Mr. Giles was for some years the treasurer of the fund. On the outbreak of the civil war mr. Giles was an active member of the committee appointed to recruit the famous Second Regiment of Fire Zouaves. When the famous Exempt Engine Company was organized on November 14, 1854, to run the heavy engine, known as the "man-killer," Mr. Giles was elected treasurer. He was an enthusiastic and intrepid fireman, and leaves on record the opinion that in his days "a fireman thought more of his engine than he did of his family."