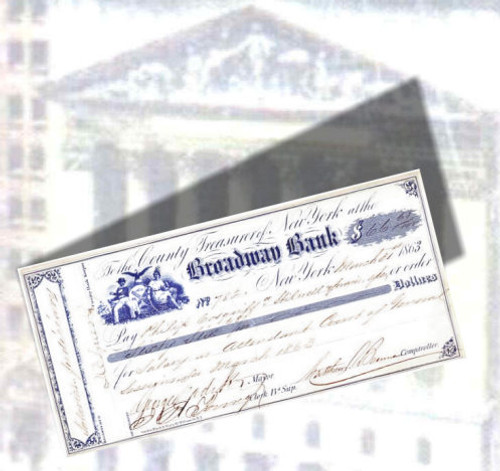 Historic bank check issued from the County Treasurer of New York from the Broadway Bank issued prior to 1864 during the Civil War. This historic document was printed by the Snyder, Black and Stern Company and has an ornate border around it with a vignette of a sailor and indian flanking the state coat of arms. This item is hand signed by the Mayor of the City of New York, George Opdyke and the city's Comptroller. The check is over 149 years old and has been cancelled with a x cut with a small punch hole in the center. George Opdyke was the Mayor of New York City from 1862-64. He was the city's first Republican mayor. He was also the mayor during the Civil War Draft Riots. He defeated the former mayor Fernando Wood and Tammany Democrat C. Godfrey Gunther to become mayor. Afer leaving political life he became one of the founder's of the EMPORIA AND SOUTHERN KANSAS RAILROAD in July 1870.