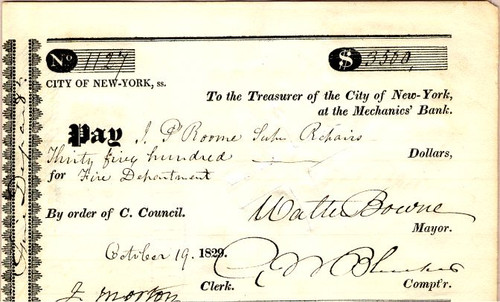 New York Treasury Note from 1829, signed by the Mayor of New York City, Walter Bowne. This item is over 182 years old. Walter Bowne (26 September 1770 31 August 1846) was the four term Mayor of New York from 1829 to 1833. Walter Bowne was born on Flushing, Long Island, the son of James Bowne and his wife Caroline Rodman. He was a New York State senator from the Southern District from 1816 to 1822, and from the 1st District 1823 to 1824. He was a member of the Council of Appointment at Albany from 1817 to 1820. He was Mayor of New York City from 1829 to 1833. Faced with reports of cholera in neighboring towns in 1832, he implemented a strict quarantine policy, regulating travel to and from New York City, and restricting ships to a distance of 300 yards from port, and carriages from within 1.5 miles of the city. His attempt to prevent an epidemic failed - because it was based on the mistaken but then-accepted notion that transmission of cholera was through personal contact rather than through contaminated water and food, The actual means of transmission was not discovered until 1883. Bowne was also the first President of 7th Ward Bank of New York City. He married Elizabeth Southgate in 1803. They had two children, Walter Bowne, Jr., and Mary King Bowne, who married John Watson Lawrence. Bowne Park (bounded by 29th and 32nd Avenue and 155th and 159th Streets in Flushing, Queens) is named for Walter Bowne. It is the site where his summer residence stood until a fire destroyed it in March 1925.