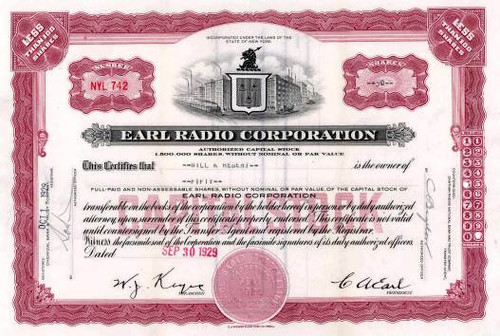 Beautifully RARE engraved certificate from the Earl Radio Corporation issued in 1929. This historic document was printed by the E.A. Wright Banknote Company and has an ornate border around it with a vignette of the company logo. This item has the printed signatures of the Company's President ( C. A. Earl ) and Treasurer and is over 74 years old. 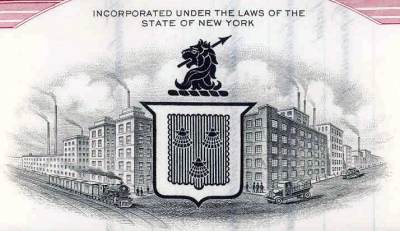 Certificate Vignette
Chas. Freshman Co. Inc.; New York: After being bought out by Walter B.Chrysler in Dec. 1927, Clarence A.Earl was installed as president. In November it merged with Freed Eisemann. The Name was changed to Earl Radio Corporation. 2000 employees, sales of $1 million in June 1929 from 13,975 sets produced, in July 23,546 sets, but the stock market crashed and Earl went into receivership on Nov.22, 1929.