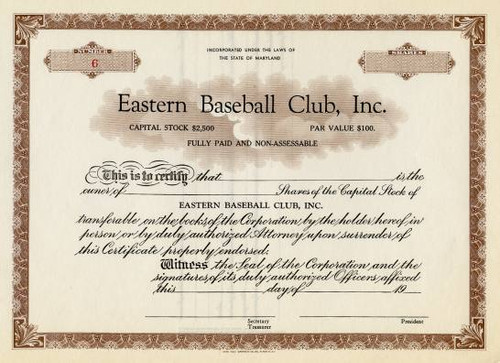 Certificate Vignette
The Eastern Shore Baseball League was a Class D minor league baseball league that operated on the Delmarva Peninsula for parts of three different decades. The league's first season was in 1922 and the last was in 1949, although the years were not consecutive, and featured teams from Maryland, Delaware, and Virginia. The first incarnation lasted from 1922-27, the second from 1937-41, and the third from 1946-49. Though the level of play was competitive and many future major leaguers would gain experience in the ESBL, funding the league remained a constant problem for the rural franchises. Host cities were Delaware: Dover, Milford, Seaford, Laurel, Rehoboth Beach, Maryland: Centreville, Easton, Federalsburg, Cambridge, Salisbury, Crisfield, Pocomoke City Virginia: Parksley, Cape Charles