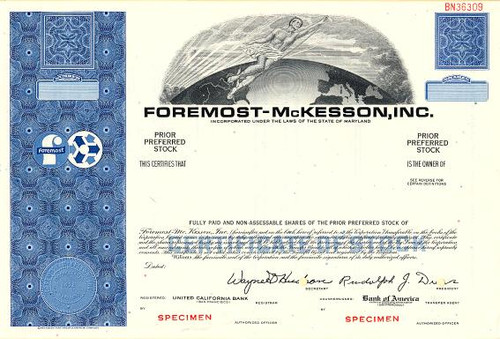 Beautiful engraved specimen certificate from the Foremost-McKesson. This historic document was printed by Security-Columbian Banknote Company and has an ornate border around it with a vignette of Mercury soaring over a globe. This item has the printed signatures of the Company's President and Secretary.

Certificate Vignette
In 1967, Foremost, a nationwide dairy distributor, and McKesson & Robbins merged to become Foremost-McKesson. The company became the largest U.S. distributor of drugs, alcoholic beverages and chemicals. It is the nation's largest supplier of milk-based products and is the largest producer of processed water in the western half of the U.S. Throughout the 1980s, Foremost-McKesson divested most of its peripheral businesses and began the process of refocusing on its core healthcare supply management businesses and investing in developing new technologies. In 1984, McKesson Corporation became the new name of the company. During the same period, HBOC began increasing and expanding its product lines through heavy investment in R&D and strategic acquisitions. McKesson Corporation today is the world's leading supply management and healthcare information technology company. Service and innovation have been the hallmarks of our success since we started our business as a wholesale distributor specializing in health-related products in 1833. About Specimens Specimen Certificates are actual certificates that have never been issued. They were usually kept by the printers in their permanent archives as their only example of a particular certificate. Sometimes you will see a hand stamp on the certificate that says "Do not remove from file". Specimens were also used to show prospective clients different types of certificate designs that were available. Specimen certificates are usually much scarcer than issued certificates. In fact, many times they are the only way to get a certificate for a particular company because the issued certificates were redeemed and destroyed. In a few instances, Specimen certificates we made for a company but were never used because a different design was chosen by the company. These certificates are normally stamped "Specimen" or they have small holes spelling the word specimen. Most of the time they don't have a serial number, or they have a serial number of 00000. This is an exciting sector of the hobby that grown in popularity over the past several years.