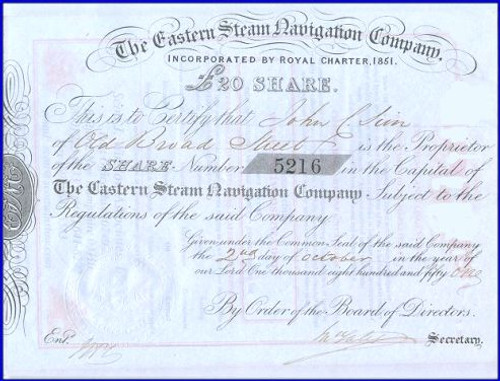 Beautifully engraved Certificate from the famous Eastern Steam Navigation Company issued in 1851. The company was chartered in 1851 the same year the certificate was issued. This item is hand signed by the company's Secretary and is over 159 years old. The certificate is embossed with the corporate seal and show an image if the famous Great Eastern Ship. 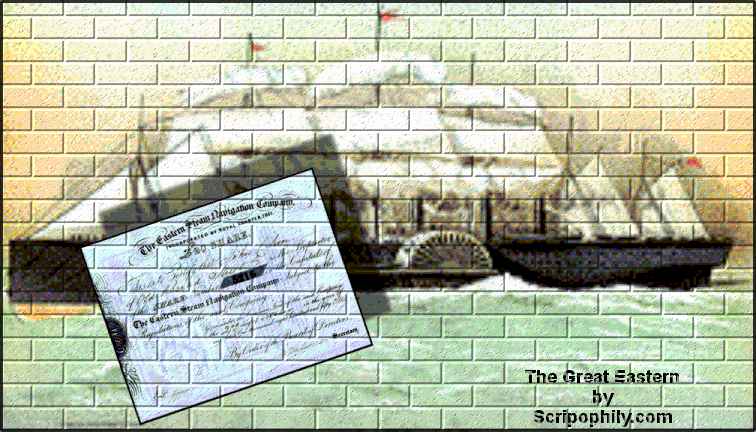 Isambard Kingdom Brunel first suggested the idea of building a giant steam-powered ship to the Eastern Steam Navigation Company. The important and profitable Far East and Australia route was dominated by the fast clipper ships which sailed via the Cape of Good Hope. Their supremacy was assured as no steamship could carry sufficient coal on board to complete the voyage without spending valuable time in port recoaling. But a ship the size Brunel was proposing would be able to carry enough coal for the entire voyage and up to 4,000 passengers in luxury. And it would outrun the clippers. This was no small undertaking - Brunel's estimate of the cost was £500,000 - but the Eastern Steam Navigation Company decided it was a risk worth taking. The job was put out to tender and the company accepted John Scott Russell's suspiciously low tender of £377,000 believing it had struck a bargain. In fact it was to prove the undoing of the company. Nevertheless, work began at Scott Russell's yard at Millwall in February 1854. News of the ambitious project filled the newspapers and crowds of sightseers converged on the shipyard to watch the largest ship in the world being built. The British public dubbed the new ship `The Great Eastern'.