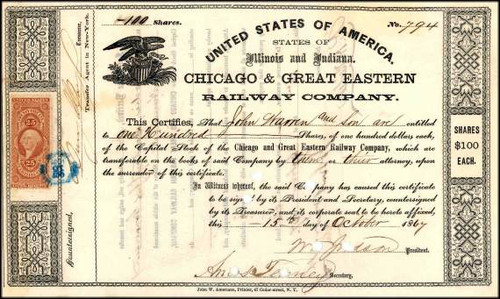 Beautifully engraved certificate from the Chicago & Great Eastern Railway Company issued in 1867. This historic document has an ornate border around it with a vignette of an eagle with a shield and a Civil War Revenue Stamp affixed to the certificate . This item is hand signed by the Company's President ( W D Judson) and Secretary and is over 136 years old. 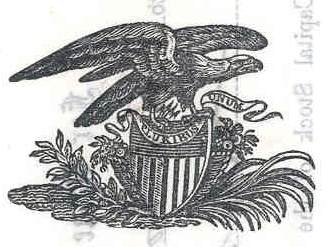 Certificate Vignette
The company was incorporated under the general laws of Indiana and Illinois through articles of consolidation dated Jan. 25, 1865; filed in Illinois May 15, 1865. In 1867, the Chicago & Great Eastern Railway Company extended from the terminus of the Richmond & Miami Railway at Richmond, Ind., to Twelfth Street, Chicago for 220.46 miles. This company was consolidated with the Columbus & Indiana Central Railway Co. to form the Columbus, Chicago & Indiana Central Railway Co. Articles of consolidation were executed Dec. 4, 1867, and filed in the offices of the secretaries of state of Ohio and Illinois on February 11, 1868, and Indiana, Feb. 12, 1868.