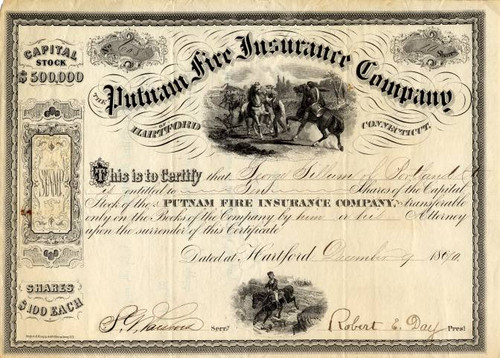 Beautiful certificate from the Putnam Fire Insurance Company Company issued in 1867. This historic document was printed by the Major & Knapp Company and has an ornate border around it with a vignette of a rider set out to tell the colonists that the War for Independence had begun for real. This item has the original signatures of the Company's President, Robert E. Day and Secretary, Samuel G. Parsons and is over 148 years old.

Certificate Vignette
Vignette was from 1775, just after the shot heard round the world was fired in Lexington, a rider set out to tell the colonists that the War for Independence had begun for real. My great, great uncle, Maj. Gen. Israel Putnam, left his plow in the field and, without changing clothes, rode 100 miles in 18 hours from Pomfret, CT to Cambridge, MA to muster Connecticut troops and combat the Siege of Boston. Now, in our time, the liquidators of our liberty are set against us and we need the same kind of urgency. The 2008 election was our Lexington and Concord and the 2010 as were our Bunker Hill. We served the Statists notice but we fell short of men and munitions to complete the job. Now the elections of 2012 are before us. We must muster an army of Constitutional Conservatives to push back the progressive Democrats & Republicans and restore our federal government to its proper jurisdiction as enumerated in Article I, Section 8 of our Constitution if we are to save the Republic. This insurance company was named after Maj. Gen. Israel Putnam. PUTNAM FIRE INSURANCE COMPANY, HARTFORD, CONN. Incorporated May, 1864. Commenced business December, 1864 Robert E. Day, President. Secretary, Samuel G. Parsons. Office, No. 240 Main Street, Hartford. Insurance in Connecticut reported in 1897 THE PUTNAM FIRE INSURANCE COMPANY OF HARTFORD. This company was organized September 1, 1864, on a capital of $300,000. Caleb B. Bowers was elected president, Daniel Buck, secretary, and in October William N. Bowers was added to the official corps as vice-president. After a hot fight the Bowers regime was overthrown at the annual election in June, 1865, when Samuel Woodruff, of Woodruff & Beach, boilermakers and machinists--a firm of national reputation during the war--was made president. That residence in Hartford presumptively qualified a person to run an insurance company had become a current superstition. First and last the delusion cost investors and other victims of misplaced confidence a great deal of money From the start the venture ran behind, and though the pace now and then slackened, the drift was never long reversed. The secretary had no taste for the economies which successful companies in their early days have found indispensable. The president had been willingly lured into a variety of outside schemes. Promoters looked to him for cash. Meanwhile warcontracts had dried up. He borrowed large sums from the company which it was inconvenient to pay. A small over-issue of stock, due to carelessness, as his friends claimed, added to the confusion. Mr. Buck was succeeded by S. G. Parsons in 1868. The next year Mr. Woodruff was forced to retire. In his valedictory he attributed the misfortunes of the enterprise to the mismanagement of the first secretary. George M. Welch followed as ad interim president from January 3rd till August 18, 1870, when Robert E. Day was elected. On probing its wounds the capital was found to be impaired over thirty-three per cent. It was now reduced to $300,000, and then raised by cash payments to $400,000. While the new management was striving to correct past errors the company was destroyed by the great Chicago fire, its losses amounting to $1,206,000. Research from OldCompany.com (old stock certificate research service)