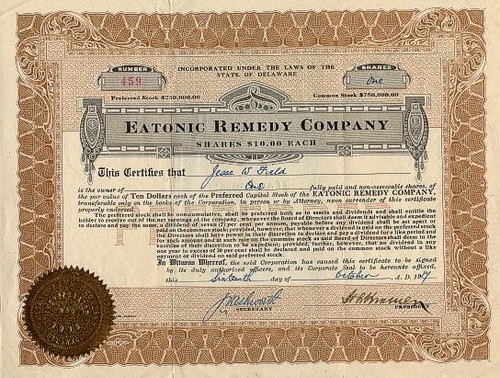 Beautiful certificate from the Eatonic Remedy Company issued in 1917. This historic document has an ornate border around it with a vignette of the company name. This item has the signatures of the Company's President, H.L. Kramer and Secretary and is over 91 years old.

Certificate Vignette
From The Journal A. M. A., Sept. 21, 1918 "Eatonic" is "distributed" by the Eatonic Remedy Co., Chicago. If one believes the claims of the Eatonic concern -- and we do not recommend this -- " the Advanced Scientific Thought of the Medical World has been called upon to produce Eatonic" ! Here are some of the claims made for Eatonic in newspaper advertisements, which, by the way, are not subject to the penalties which control claims made for medicinal products on the trade packages : " INSTANTLY relieves HEARTBURN, BLOATED, GASSY FEELING. STOPS acidity, food repeating, and stomach misery." Aid's digestion; keeps the stomach sweet and pure." " Eatonic is the BEST remedy . . ." " Sponge up the excess acids and poisonous fluids from the stomach by chewing these compressed compounds -- stomach pains guaranteed to leave at once." " Removes Indigestion, Bloat, Heartburn, etc." In the trade-package the claims are more cautious. We do not find there that it "instantly relieves heartburn, bloated, gassy feeling," etc., but we do find: " Intended for the relief of ... Heart Burn . . . Gassy, Windy, Bloated Stomach . . ." Which, of course, is different ! The Eatonic Remedy Co. might say with equal safety that their tablets were "intended for" the reduction of the national debt, or the repairing of automobile tires. There is nothing to prevent a manufacturer from declaring what his product is "intended for." And who could resist the lure of this : " Be a good liver -- while you live. You don't have to live on a Death Diet, but eat what you like and be normal. Remember, Eatonic drives the gas out of your body -- and the bloat goes with it. It stops the super-acidity -- that is, too much acid -- that causes nearly all stomach trouble." At the request of the Propaganda Department, the Association's laboratory took up Eatonic for investigation. Here is its report: LABORATORY REPORT Eatonic is in the form of black, uncoated tablets, having a mintlike odor, and a sweet and mintlike taste. Each tablet is stamped "Eatonic" and each weighs about 27.4 grains. A qualitative examination showed Eatonic to contain calcium, magnesium, carbonate, sugar, charcoal and silica or a silicate. The odor and taste suggested peppermint. As no soluble carbonate could be detected, the calcium and carbonate are probably present as calcium carbonate. The qualitative examination indicates that Eatonic is composed of calcium carbonate, charcoal, sugar, and oil of peppermint as flavoring. From this examination, and from the quantitative determinations carried out, we conclude that Eatonic is essentially calcium carbonate 20 parts, sugar 55 parts, charcoal 12 parts in a hundred. The remainder is flavoring, and material undetermined. Each tablet contains approximately 5.5 grains calcium carbonate, 15 grains sugar, and 325 grains charcoal. This, then, is the best that the "Advanced Scientific Thought of the Medical World" could do : Calcium carbonate (chalk) 5% grains Sugar 15 grains Charcoal 3% grains Surely the labors of such a mountain have brought forth a ludicrously insignificant mouse ! Summed up, it may be said that "Eatonic" is a simple and innocuous tablet of the antacid type. It will do nothing that cannot be done equally well by the well-known "sodamint tablets." The latter, being nonproprietary, and therefore competitive, are sold at a fraction of the cost of "Eatonic" while the incentive to force them on the public under false and misleading claims is reduced to a minimum. -- (From The Journal A. M. A., Sept. 21, 1918.)