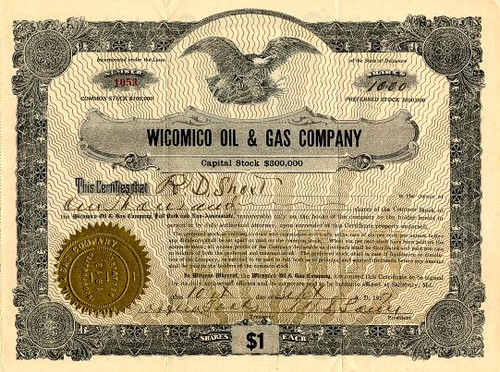 Beautiful certificate from the Wicomico Oil and Gas Company issued in 1917. This historic document was printed by Balio Company and has an ornate border around it with a vignette of an eagle. This item has the signatures of the Company's President and Treasurer and is over 90 years old. 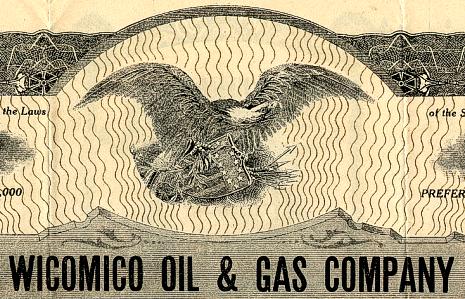 Certificate Vignette
Maryland Session Laws, 1914 PHILLIPS LEE GOLDSBOROUGH, GOVERNOR. 1549 SECTION 1. Be it enacted by the General Assembly of Maryland, That the Wicomico Oil and Gas Company, a corporation incorporated under the laws of the State of Delaware and licensed to do business in the State of Maryland, its successors and assigns, be and it is hereby authorized and empowered to make, construct, lay down, equip, operate and maintain pipe lines for the transmission of natural gas from gas wells located within the State of Maryland, for the purpose of lighting, heating, power, or any other purpose for which it may be suitable; and also to authorize and empower the said Company, its successors and asigns, to run and utilize such laterals or branches within the State of Maryland in the counties of Somerset, Worcester, Wicomico, Dorchester, Caroline, Talbot, Kent, Queen Anne's, and Cecil, and Cities Towns and Villages thereof as the respective Commissioners, Mayors, and Councils, or other governing bodies thereof will permit; and said corporation, its successors and assigns, shall have a right to charge such reasonable rates for transmission, sale or delivery of such natural gas on its main line and any of the branches or laterals thereof as the Board of Directors or its authorized agents may, from time to time, determine; and the said corporation, its successors and assigns, shall have power and authority to furnish, buy, sell and use such natural gas for the lighting of streets, alleys, roads, public and private buildings, factories and other things and for whatever purposes the same may be applied or utilized, as well as transmit natural gas for other persons or corporations, from gas wells located within the State of Maryland, but the consent of the owner or owners of the lands under or through which the said main lines, branches or laterals or pipes shall or may pass shall be first obtained, if obtainable, for a reasonable consideration, if not, then the said property or so much thereof as may be necessary, may be condemned according, to the provision of Article 23 of the Code of Public General Laws of the State of Maryland, and the said Corporation, its successors and assigns, shall also have power and authority to erect, construct, build and maintain such bridge or bridges over any stream or streams in the State of Maryland in said Counties as the Board of Directors or authorized agents of said Corporation may deem necessary for the use and purpose as aforesaid, subject to the approval of the properly constituted authorities, and to the necessary means to accomplish all the purposes of said corporation; provided, however, permission is first granted by the Board of County Commissioners or of the municipal authorities of the towns and cities intended to be connected with said gas or pipeline, to the use of the roads, streets, and other property proposed to be taken for its conduits and connections; and the said corporation, its successors and assigns, are further authorized and empowered to lay down, run, construct, maintain its said pipe lines along, beside, under or across the State roads of the State of Maryland, provided the said Corporation, its successors or assigns, before commencing work or construction upon any portion of any State road or roads included in the State Road System of Maryland, shall apply to the State Roads Commission for a permit to construct its lines and overhead or underground equipment upon, over or under any such road or crossing of said road and all work done under such permit upon any such road or crossing of said road, shall be done in conformity with the rules and regulations of the State Roads Commission and located and designated by said Commission and in full compliance with the provisions and terms of any permit granted by said State Roads Commission and to the satisfaction of said Commission; and before doing any such work the said Corporation shall file with the State Roads Commission, if required, a bond in such amount and penalty as the State Roads Commission may require for the satisfactory performance of all the terms and conditions of said permit. SEC. 2. And be it enacted, That said Corporation shall have and enjoy in the Counties the privileges, powers and franchises above mentioned, in conjunction with and in addition to the powers enumerated and otherwise granted in its Charter duly filed with the authorized officer of the State of Maryland; pro- vided, however, that nothing in this Act is intended or shall be construed to relieve the said corporation from any of the pro- visions of the Public Service Commission Law. SEC. 3. And be it enacted, That the privilege of exercising in the Counties aforesaid of the State of Maryland the rights and powers named and otherwise indicated in its charter shall be subject to modification and control by the State of Maryland as fully, in the same manner and by the same authority as if the said corporation was incorporated by a special act of the Legislature of the State of Maryland. SEC. 4. And be it enacted, That this Act shall take effect from the date of its passage. Approved April 21st, 1914.