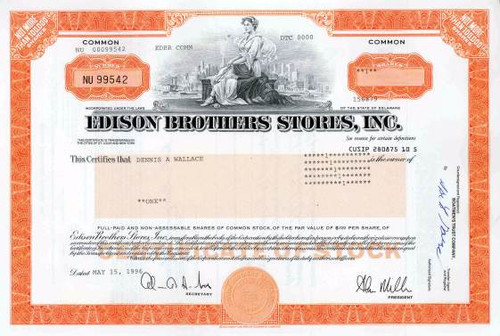 Beautifully engraved certificate from Edison Brothers Stores, Inc. issued in 1996. This historic document was printed by the Security-Columbian Banknote Company and has an ornate border around it with a vignette of an allegorical woman holding a medical staff and sitting in front of a city. This item has the printed signatures of the Company's President and Secretary. 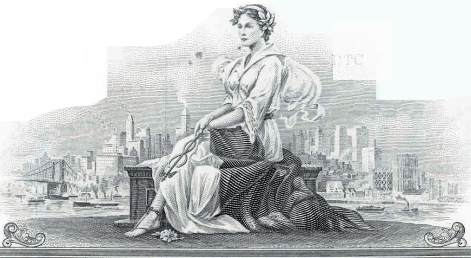 Certificate Vignette
Edison Brothers Stores, Inc. owns and operates apparel stores and footwear stores in forty-nine states, Puerto Rico, the Virgin Islands and Canada. The company operates over 1,700 apparel stores in eight chains. During fiscal 1995 the company and 65 of its subsidiaries filed for relief under Chapter 11 of The United States Bankruptcy Code. The company sold substantial part of its entertaiment division during the year 96 and intends to sell the rest of the division in 97. During 1996, the company closed 419 stores and started 85 new stores. Apparel stores accounted for 70% of 96 revenues; footwear stores, 29% and other, 1%.