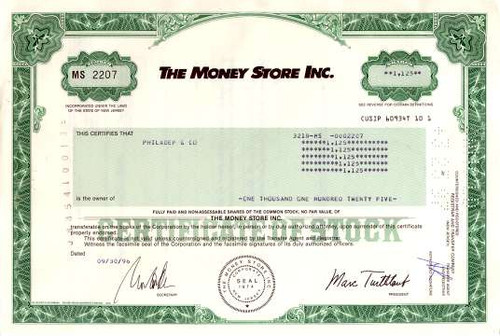 Beautifully engraved certificate from the The Money Store Inc. issued in 1996-1997. This historic document was printed by the Security-Columbian Banknote Company and has an ornate border around. This item has the printed signatures of the company's president and secretary and is over 3 years old.

Certificate Vignette
The company, one of the US's leading subprime lenders, offers customers with varying credit quality such products as first and second mortgages, home equity and home improvement loans, and lines of credit. The company also offers its Back on Track debt-consolidation programs. The Money Store also offers mortgages online. The company is owned by Charlotte, North Carolina-based megabank First Union. First Union has absorbed The Money Store's Small Business Administration and student loan operations. First Union has closed The Money Store's branch offices and is discontinuing the company's home equity lending activities. First Union Corporation, with headquarters in Charlotte, North Carolina, is the nation's sixth largest banking company based on assets of $258 billion at June 30, 2000. They have the largest domestic deposit share from Florida to Connecticut. First Union has a nationwide presence as the sixth largest securities brokerage company, based on more than 7,000 Series 6 and Series 7 registered representatives. They are advisors to the nation's 20th largest mutual fund complex. They are among the nation's largest middle-market commercial lenders. Our goal is to complement our traditional banking products with a completely integrated selection of investment banking, brokerage and asset management products and services. They rank among the Top 10 in several key Capital Markets products and services, including asset securitizations, leveraged finance and loan syndication transactions. First Union also has sizable small business and cash management operations, which rank among the Top 3 nationwide.