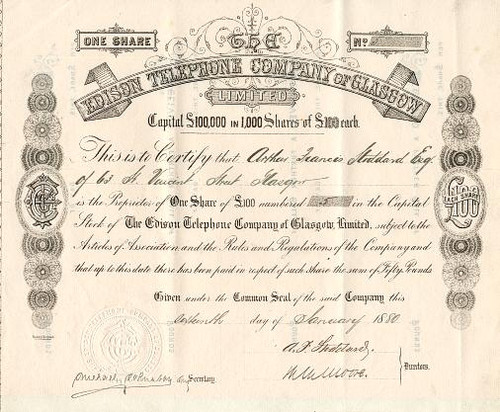 Beautifully engraved RARE certificate #5 from the Edison Telephone Company of Glasgow Limited issued in 1880. This historic document has an ornate border a vignette of the company's name. This item is hand signed by the Company's Directors and Secretary and is over 125 years old. This is the first time we have had this certificate for sale and believe it is quite rare. The certificate was issued to Arthur Francis Stoddard (See Bio below) who also signed it as one of the Directors.

Certificate Vignette
The Edison Telephone Company of Glasgow, Ltd. was established on October 28, 1879, to market the Edison telephone in Glasgow and its environs. It was absorbed by the Edison Telephone Company of London, Ltd. on May 5, 1880. Edison Telephone Company of London, Ltd. After the merger, the Edison Telephone Company of London, Ltd. became the United Telephone Company, Ltd on May 13, 1880. Stoddard International was started in Renfrewshire in the 1860s by Arthur Francis Stoddard. The silk merchant from Massachusetts had arrived in Glasgow in 1844, seeking refuge from a slump in the United States. In 1853, he moved to Elderslie, Renfrewshire, where he came into contact with carpet making through the nearby Patrickbank Mill. The mill, owned by two brothers, John and Robert Ronald, had produced block-printed Paisley shawls but it switched to printed tapestry carpets when the market for shawls declined in the mid-1850s. However, the business was failing and in 1862, Stoddard acquired the mill and through his business contacts, especially overseas, succeeded where the Ronald brothers had failed. Within five years, 75% of Stoddard's production was being exported to the US. By 1870, the company was producing rugs and stair pads and Stoddard himself had patented an anti-moth lining. However, higher import tariffs imposed by the US led Stoddard to seek new markets in Europe. Following Arthur Stoddard's death in 1882, his son-in-law Charles Bine Renshaw took control of the company, with his brother Arthur as a partner. An archive picture of the design process (picture courtesy of Glasgow University Archives) By the early 1890s, the firm was making tapestry carpeting and stair pads, although the latter were discontinued in 1895 in favour of carpet squares and a large design department ensured a great variety of carpet designs were available. The Renshaws rebuilt the works, installing electric lighting and a new design for the production process. The company built housing for its workers and at Christmas the workers were entertained on Renshaw's estate. Renshaw expanded the business through the takeover of a number of local competitors. Charles Renshaw's son, Stephen, took over running of the company after WWI. Mounting losses In 1970, the company was bought by Stewart Spinners (Galashiels) Ltd and a decade later the Guthrie Corporation Ltd of London acquired a £1.5m stake in Stoddard Holdings Ltd. Guthrie closed down its Templeton factories in Bridgeton, Glasgow, and transferred production to Stoddard's Elderslie site. Stoddard Holdings Ltd became a public limited company in 1988 and in 1998 changed its name to Stoddard International Plc. During the 1960s, there were more than 1,700 Stoddard employees but this was down to 500 by last year. In 2004, the company closed two plants - including its weaving factory and headquarters at Elderslie - and consolidated the business to one site in Kilmarnock. Mounting losses led to the company calling in the receivers in January 2005. However, the rescue effort failed and Stoddard closed for business less than two months later.