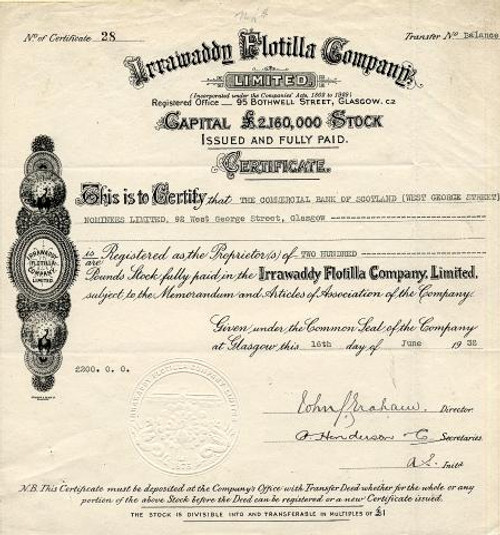 Beautiful certificate from the Irrawaddy Flotilla Company issued in 1932. This historic document was printed by Gilmour & Dean and has an ornate border around it with a vignette of the company name. This item has the signatures of the Company's President and Secretary and is over 75 years old.

Certificate Vignette
The Irrawaddy Flotilla Company, founded in 1865 in Burma (Myanmar), grew to become the 'greatest river fleet on earth' with over 600 vessels carrying some 9 million passengers a year along the Irrawaddy River of Burma at its peak in the 1920's. At its peak, the original Irrawaddy Flotilla Company operated the largest fleet of ships in the world on the Irrawaddy River (also known as the Ayeyarwady River) in Burma, now Myanmar. The Company was British owned and managed by P Henderson & Company from Glasgow,Scotland. The company operated from the mid-1860s until the late 1940s and had a fleet of over 600 vessels. However, many of the ships were destroyed by their owners or crew in 1942 in advance of the Japanese invasion of Burma.