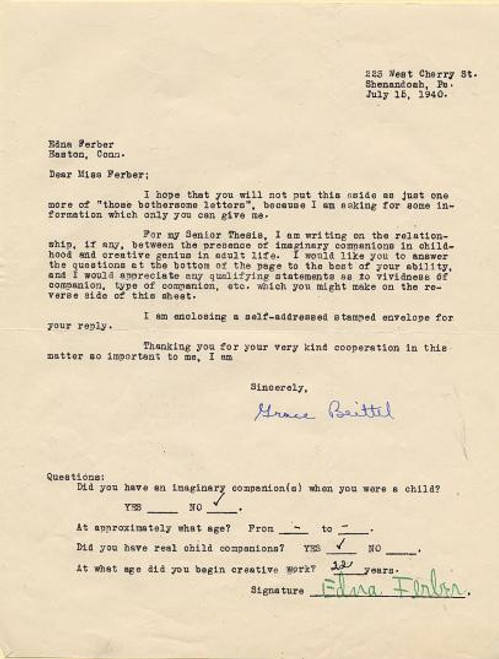 Historic letter sent with a brief questionaire, 1940, which Edna Ferber has neatly signed with a couple added responses. This item is over 67 years old.

Edna Ferber's Autograph
Edna Ferber was born in Kalamazoo, Michigan (in 1885, not 1887 as sometimes stated), to a Hungarian-born Jewish storekeeper and his Milwaukee, Wisconsin-born wife, Jacob Charles and Julia (Neumann) Ferber. She would become a leading American author who wrote a number of successful books and plays. After living in Chicago and Ottumwa, Iowa, at age 12, Ferber and her family moved to Appleton, Wisconsin, where she graduated from high school and briefly attended Lawrence University. She took jobs at the Appleton Daily Crescent and the Milwaukee Journal before publishing her first novel. She covered the 1920 Republican and Democratic national conventions for the United Press Association. Her novels generally featured a strong female as the protagonist, although she fleshed out multiple characters in each book. She usually highlighted at least one strong secondary character who faced discrimination ethnically or for other reasons; through this technique, Ferber demonstrated her belief that people are people and that the non-so-pretty persons have the best character. Due to her imagination in scene, characterization and plot, several theatrical and film productions have been made based on her works, including: Show Boat, Giant, Saratoga Trunk, Cimarron (which won an Oscar) and the 1960 remake. Two of these works - Show Boat and Saratoga Trunk - were developed into musicals at the behest of Ferber herself. In 1925, she won the Pulitzer Prize for her book So Big, which was made into an early talkie movie in 1932, starring Bette Davis, Barbara Stanwyck and George Brent. It was the only movie Stanwyck and Davis ever appeared in together, and Stanwyck played Davis' mother-in-law, although only a year older in real life, which allegedly displeased her, as did the attitude of the hoydenish Davis. A 1953 remake of So Big starred Jane Wyman in the Stanwyck role, and is the version most often seen today. Ms. Ferber was a member of the Algonquin Round Table, a group of wits who met for lunch every day at the Algonquin Hotel in New York. Edna Ferber died on April 16, 1968, at her home in New York City, of cancer, at the age of 82. The New York Times said, "she was among the best-read novelists in the nation, and critics of the 1920s and 1930s did not hesitate to call her the greatest American woman novelist of her day". Ferber was portrayed by Lili Taylor in Mrs. Parker and the Vicious Circle. History from Wikipeida and OldCompanyResearch.com.