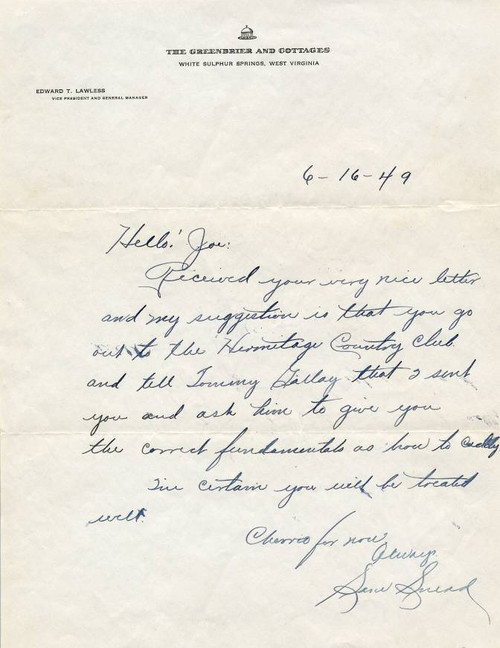 Letter from Sam Snead sent to Joseph Barnes in 1949. This historic document written by famous golfer Sam Snead on the letterhead of The Greenbrier and Cottages of West Virgina. This item has the original signature of Sam Snead dated June 16, 1949.

Signature
Samuel Jackson Snead (May 27, 1912 May 23, 2002) was an American professional golfer who was one of the top players in the world for most of four decades. Snead won a record 82 PGA Tour events including seven majors. He failed to win a U.S. Open, though he was runner-up four times. Snead's nickname was "Slammin' Sammy." He was admired by many for having the so-called "perfect swing," and generated many imitators. Snead was famed for his folksy image, wearing a straw hat, playing tournaments barefoot, and making such statements as "Keep close count of your nickels and dimes, stay away from whiskey, and never concede a putt." He was inducted into the World Golf Hall of Fame in 1974, and received the PGA Tour Lifetime Achievement Award in 1998. History from Wikipedia and OldCompany.com (old stock certificate research service)