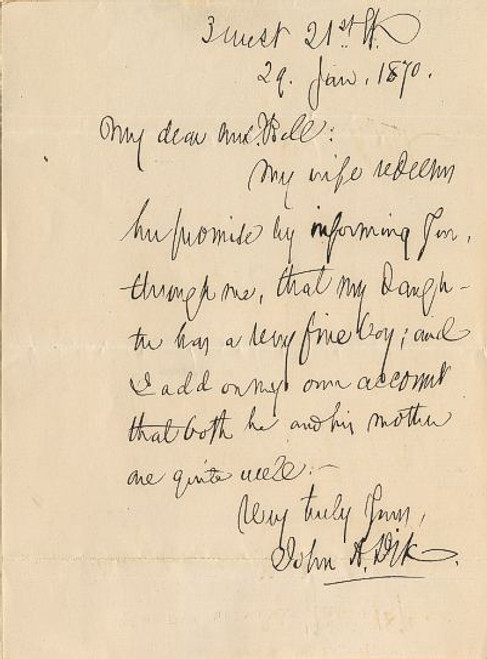 Historic General John Dix handwritten letter regarding the new birth a grandson to his daughter dated January 29, 1870. This item is over 139 years old. 5"x8" folds, xf. The address on top of the letter is No. 3 West 21st Street, which was the address of John Dix. John Adams Dix - born July 24, 1798 , Boscawen, N.H., U.S. died April 21, 1879 , New York City. political leader and U.S. Army officer who, as secretary of the treasury of the United States (1861), issued to a treasury officer in New Orleans the famous order: "If any one attempts to haul down the American flag, shoot him on the spot." At the start of the American Civil War, Dix was appointed a major general in the New York Militia. He joined the Union Army as the highest ranking major general of volunteers during the war, effective May 16, 1861. He entered the U.S. Army at the age of 14 and served in the War of 1812 and the U.S. Civil War (186165). Major General John Dix also served as a United States Senator, Governor of New York, Ambassador to France and Secretary of Treasurer.