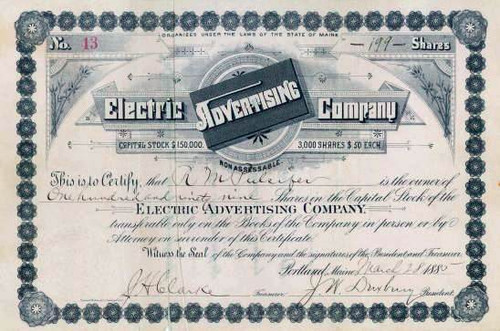 Beautifully engraved RARE certificate from the Electric Advertising Company issued in 1885. This historic document has an ornate border around it with a vignetee of an electric sign that says " Advertising". There is also an embossed corporate seal with the company's name and the 1885 date of organization. This item is hand signed by the Company's President ( J. W. Duxbury ) and Treasurer and is over 126 years old. The certificate has been folded and has a minor seperation on the fold. This is the first time we have seen this certificate and the earliest electric advertising certificate we have seen. 19th and 20th Centuries Gas Lighting. The first illuminated sign dates back to 1840 when P.T. Barnum's Museum was advertised by a gas-lit display. Gas lighting continued to be used on theater marquees, drug stores and other retail stores until the electric lamp was introduced. Incandescent Bulbs In 1881 the first electrical sign was built with incandescent bulbs in London, England and featured the word "EDISON" during the International Electrical Exposition in January, 1882. The United States pioneered the night display type of outdoor advertising, and the era of the illuminated sign is distinctly American. The first electric spectacular was erected in 1891 in New York City. The sign was 50 ft. high and 80 ft. wide and contained 1,457 lamps. The copy was