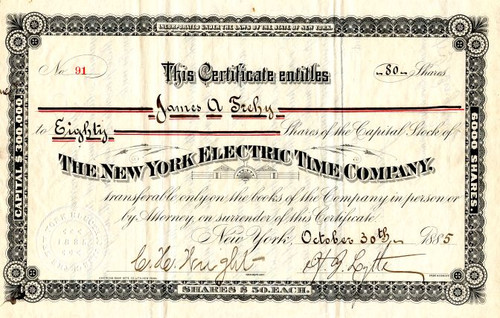 Beautiful certificate from the New York Electric Time Company issued in 1885. This historic document was printed by the American Banknote Company and has an ornate border around it. This item has been hand signed by the Company's President, and Secretary, and is over 126 years old. The local business of the Time Telegraph Co. has been transferred to the New York Electric Time Co., which has acquired the franchise and plant for the cities of New York and Brooklyn, also Long Island and Staten Island. This service has been very popular and satisfactory, and deserves to be still more extensively used. The office of the local company is at 15 Cortlandt street. The parent company will confine its business to the production of apparatus and the organization of sub companies.