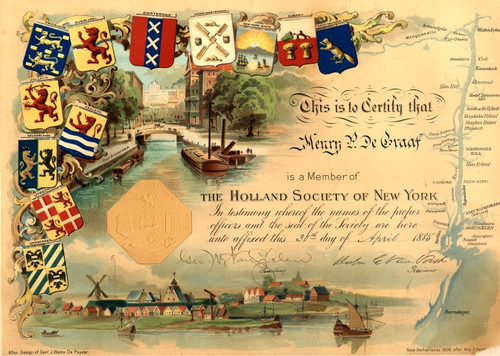 Beautiful RARE membership certificate from the Holland Society of New York issued in 1885. This historic document was printed by J. Watts De Peyster and has an ornate border around it with a vignette of a waterfront in Netherlands with varoius flags. This item has been hand signed by the Society's President, Judge Hooper C. Van Vorst and Secretary, George West Van Siclen and is over 127 years old. Cut lower right corner. Certificate was issued to Hanry P. De Graff.

Certificate Vignette
George West Van Siclen was the first to propose the formation of a New York society composed of the descendants of the New Netherland settlers. The idea came to Mr. Van Siclen in 1880 when he appeared as a legal counsel for one party, and another gentleman of Dutch descent, Lucas L. Van Allen, appeared as the legal counsel for the other party, in a series of litigation before the Supreme Court and the Court of Common Please for the City and County of New York. When the case appeared before the Supreme Court, Aaron J. Vanderpoel was the associate counsel with Mr. Van Siclen, and the hearing came before Judge Hooper C. Van Vorst. In the Court of Common Please the hearing was also before another judge of Dutch descent. This conjunction of lawyers and justices of Dutch background suggested to Mr. Van Siclen that the massive immigration and economic change then in progress had not entirely submerged the Dutch founders of New York , and that an association of the descendants of the Dutch pioneers would not only allow for the "pleasures of friendly intercourse among people who had a common pride in their origin" but would also be a means of "augmenting the wholesome influence that the integrity, the wisdom, the tolerance, the industry, and the thrift which the Dutch had never ceased to exercise upon the nation." Mr. Van Siclen, however, was not certain that the descendants of a people, who had not only lost their ancient language and culture but who were also now the mainstream of the current culture, could be induced to come together to form and maintain a society in the memory of their ancestors. Desiring to know whether the views he entertained were shared by other, Mr. Van Siclen invited Judge Van Vorst, Mr. Vanderpoel, and Mr Van Allen, as well as George W. Van Slyck and George M. Van Hoesen, do discuss with him at his New York City home about the feasibility of forming such an association. The seed of the Holland Society of New York was firmly planted and quickly sprouted. On April 30, 1885, the Society adopted a constitution at Clark's Restaurant, 22 West 23rd Street, and the following day, May 1, 1885, the State of New York incorporated the Society. The forty-six gentlemen who signed the Certificate of Incorporation have ever since been considered the founding fathers of the organization: W. A. Ogden Hegeman; William M. Hoes; Arthur M. Jacobus, M.D.; Wilhelmus Mynderse; Robert B. Roosevelt; Lucas L. Van Allen; Edwin E. Van Auken; Robert W. Van Boskerck; Cornelius Van Brunt; Elisha W. Vanderhoof; Frank F. Van Derveer; John R. Van Derveer; Aaron J. Vanderpoel; August H. Vanderpoel; Herman W. Vander Poel; A. B. Van Dusen; H. S. Van Duzer; George M. Van Hoesen; Alexander T. Van Nest; Warner Van Norden; David Van Nostrand; John E. Van Nostrand; Henry D. Van Order; Gilbert S. Van Pelt; Killiaen Van Rensselaer; Abraham Van Santvoord; Richard Van Santvoord, M.D.; H. Van Schaick; Jenkins Van Schaick; George W. Van Siclen; A. H. Van Sinderen; George W. Van Slyck; Francis H. Van Vechten; Henry C. Van Vechten; A. K. Van Vleck; Robert B. Van Vleck; Philip Van Volkenburgh, Jr.; Thomas S. Van Volkenburgh; W. W. Van Voorhis; Hooper C. Van Vorst; George Van Wagenen; Edgar Van Winkle; William Van Wyck; Benjamin F. Vosburgh, M.D.; and Jacob Wendell. With these signatures the Holland Society of New York formally began its existence. Hooper C. Van Vorst was officially made the first president, and George West Van Siclen officially made secretary and treasurer.