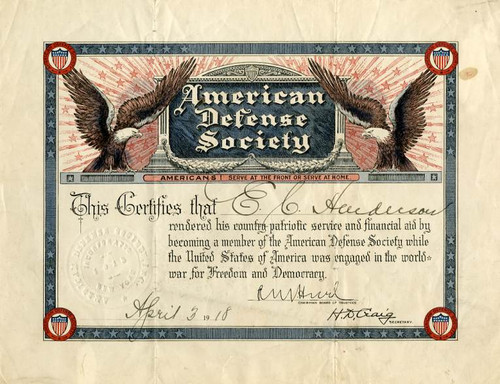 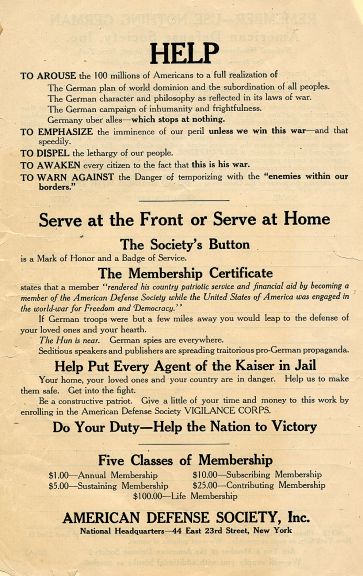 Broadside - Shown for illustrative purposes
The American Defense Society was a U.S. political group of the late 1910s. The group advocated intervention by the United States against Germany during World War I and against the Bolsheviks after the war. The ADS was started in August 1915 by Clarence Smedley Thomas, Cushing Stetson, and John F. Hubbard as a splinter group from the National Security League, leaving the NSL because the older group was uncritical in its support of the Wilson administration. The ADS favored Progressivism and Progressive reforms, but was much more militaristic than the NSL. During its heyday between 1915 and 1919, the ADS opposed both Germany and Bolshevism with increasingly xenophobic, imperialist, and racist undertones. Such undertones were not uncommon in the Progressivism of that time, but were more prominent than the norm in the ADS. Ironically, the American hysteria against the "Hun" and the radical Bolsheviks ended up ruining the reformist movement of which the American Defense Society, the National Security League, and all Progressives were a part. This defunct organization was instrumental in perpetuating antisemitism. Boris Brasol approached it with the Protocols of the Elders of Zion, and it subsidized that work's first USA publication in book form in August of 1920. Among the ADS' political stances: Total victory against Germany, with no discussion of peace terms Centralized organization of national industry (i.e., the War Industries Board) Expulsion of Socialists from U.S. politics Suppression of sedition One hundred percent Americanism History from Wikipedia and OldCompanyResearch.com (old stock certificate research service).