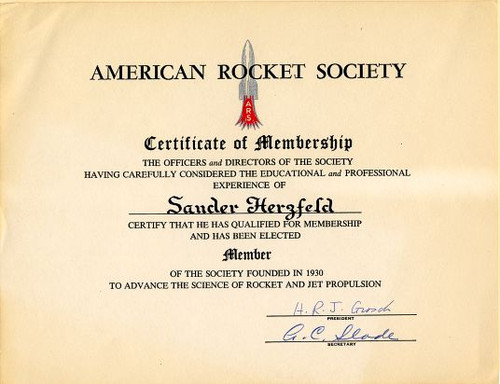 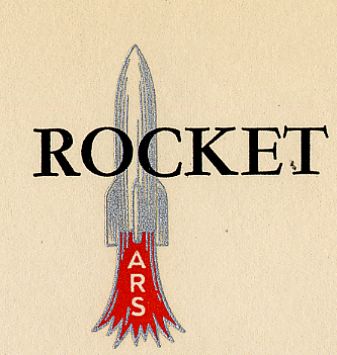 Certificate Vignette
The American Rocket Society (ARS) began life on April 4, 1930, under the name American Interplanetary Society. It was founded by G. Edward Pendray, David Lasser, Laurence Manning and others. Its name was changed to American Rocket Society on April 6, 1934. The end came in early 1963 when it was absorbed into the American Institute of Aeronautics and Astronautics (AIAA). The American Rocket Society did pioneering work in the 1930s testing the design requirements of liquid-fuelled rockets, with a number of successful test launches occurring in this period pointing the way to the United States space program. Herb Grosch (Herbert R. J. Grosch) (born 1918) is an early computer scientist, perhaps best known for Grosch's law, which he formulated in 1950. Grosch's Law is an aphorism that states "economy is as the square root of the speed." Born in Canada, he moved to the United States, where he received his B.S. and PhD in astronomy from the University of Michigan in 1942. In 1945, he was hired by IBM to do backup calculations for the Manhattan Project, and went on to work on Project Whirlwind at MIT in 1951, and on other early computer projects at General Electric. Back at IBM, he served as their first space program manager in 1958-1959. Grosch served as editor of the journal Computerworld from 1973 to 1976, and he was the president of the American Rocket Society (which became the American Institute of Aeronautics and Astronautics) and the Association for Computing Machinery from 1976 to 1978. Grosch received the Association for Computing Machinery Fellows Award in 1995, and the citation that accompanied it read, "A computer pioneer who managed important space and technology projects, Grosch is respected for discovering and describing the relationship between speed and cost of computers." He holds the distinction of being the second scientist hired by IBM (after Wallace J. Eckert) and the first employee at that company with facial hair, at a time when beards were prohibited by IBM.