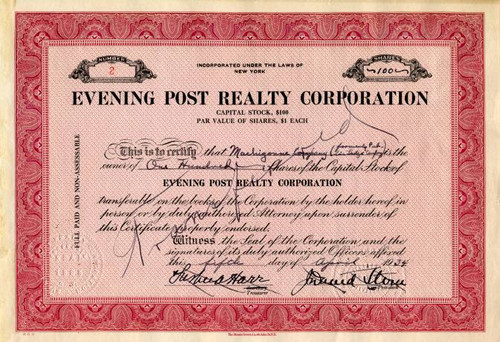 Beautiful certificate from the Evening Post Realty Corporation issued in 1934. This historic document was printed by the Broun Green Company and has an ornate border around it with a vignette of the company name. This item has the original signatures of the Company's President, J. David Stern and Treasurer, Luther A. Harr and is over 79 years old. 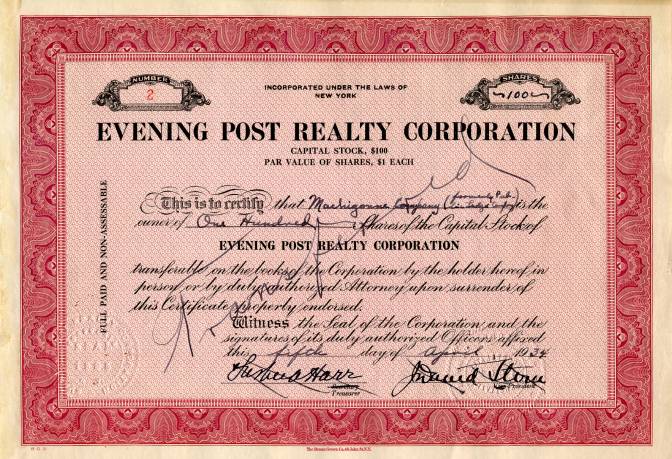 Certificate
In 1934, J. David Stern purchased the New York Evening Post, changed its name to the New York Post, and restored its broadsheet size and liberal perspective. Jewish Telegraphic Agency J. David Stern, New Owner of N. Y. Post, a Leader in Journalism and in Jewry December 17, 1933 Modest, unassuming, not particularly prepossessing, of few words, is J. David Stern, whose acquisition last week of The N. Y. Evening Post has placed him in the front rank of American publishers. Behind these more or less neutral qualities is a dynamic personality, eyes that are restless, a mind that is quick for essentials, a fighter who knows the value of constant pummeling, a full-blooded American with a keen sense of fair play, an executive who is always one stepÃ¢€"often moreÃ¢€"ahead of his associates. If he tires the people who work with him it is not because he is unreasonable in his demands, but because they find it difficult to maintain his pace. To his seemingly boundless store of energy and to his square shooting are attributed his phenomenal riseÃ¢€"at the age of 47Ã¢€"from comparative obscurity to his present position of preeminence in American journalism. Leaders in the fourth estate and in American government have kept an eye on J. David Stern since his acquisition of the Philadelphia Record five years ago; more so since he has demonstrated what a tremendous power for good along civic and political lines a newspaper can be, and how, in rendering this service, it revitalized itself even from the angle of financial returns. The story of J. David Stern is enough to tempt any writer familiar with it. However, one must forego at this time, limiting himself to J. David Stern's place in the Jewish world. WED TO JULIET LIT Born in Philadelphia in 1886, he was graduated from the William Penn Charter School in 1902. His father, David Stern, was a well-known and highly-esteemed member of the local Jewish community. Before her marriage, his mother was Sophie Muhr, a sister of Simon Muhr, distinguished merchant and philanthropist, who played an important part in the Jewish and secular communities of his day. By marriage J. David is related to the Lit family, having married Juliet Lit, daughter of Junker D. LitÃ¢€"a woman of considerable literary attainment. After graduating from the regular college course at the University of Pennsylvania (1906) he entered the University Law School and was graduated in 1909, with a splendid record as a student of the law. But Stern was not to be a lawyer. Already the call of the newspaper kept ringing in his ears. Beginning at the very bottom of the ladder, he served in almost every capacity. His Jewish interests were centered around the Y.M.H.A. In those days the Philadelphia "Y" was a sort of rendezvous, a club house, where the younger men of the older families would meet from time to time for what we might call today Jewish cultural advancementÃ¢€"debates, lectures, dramatics, not necessarily Jewish in content but under Jewish supervision. With a large number this was the extent of their Jewish interests and Jewish activity. Together with several others, Stern organized and was the first editor- Read more: http://www.jta.org/1933/12/17/archive/j-david-stern-new-owner-of-n-y-post-a-leader-in-journalism-and-in-jewry#ixzz2XjG3pNDS