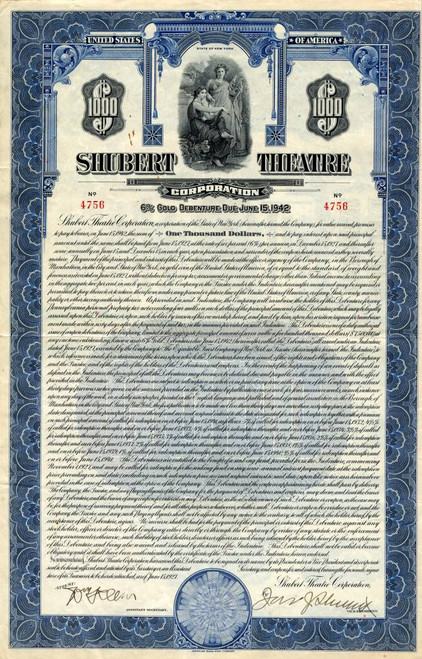 Beautifully engraved certificate from the Shubert Theatre Corporation issued in 1927. This historic document was printed by the American Banknote Company and has an ornate border around it with a vignette of 'Art and Music'. This item has the signatures of the Company's V. President, Jacob J. Shubert and Secretary, and is over 90 years old. 23 coupons attached on right side. 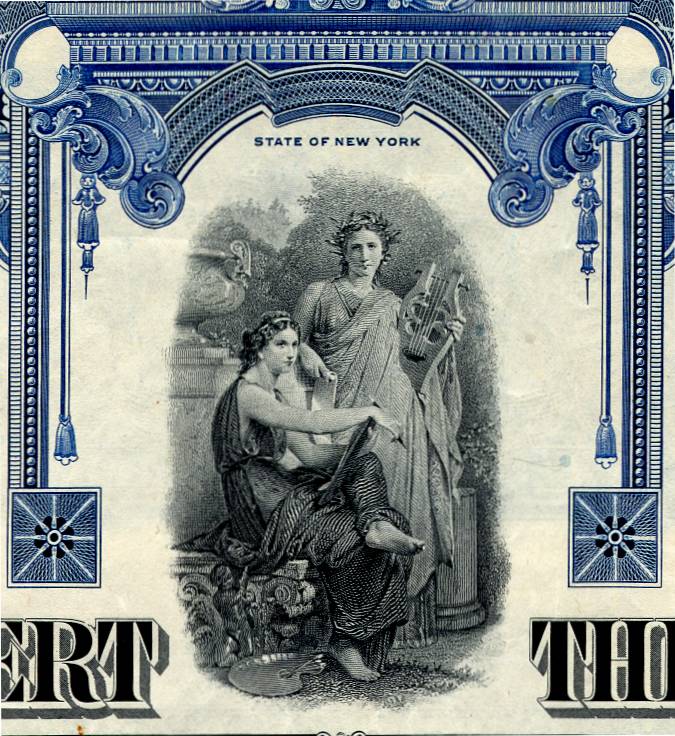 Certificate Vignette
The company was incorporated in 1924 and was engaged in the business of producing legitimate theatrical attractions, booking legitimate attractions in theatres throughout the United States, and operating approximately 40 theatres in eight states for the presentation of legitimate attractions. They owned 23 theatres and had leases on 25 theatres and owned stock interests in an additional 7 theatres. Shubert, family of American theatrical producers and theater owners who were brothers: Lee Shubert (1875-1953), Sam S. Shubert (1876-1905), and Jacob J. Shubert (1880-1963). The brothers, all born in Syracuse, New York, moved to New York City in 1900, where they leased the Herald Square Theater, the first of an empire that at its height included more than 60 theaters throughout the United States. Beginning as theater owners and operators, the Shuberts soon became producers of plays and managers of performers as well. They produced more than 500 plays, including many operettas by Sigmund Romberg and Victor Herbert. Among the performers they managed were entertainers Al Jolson and Eddie Cantor and the French actor Sarah Bernhardt. Their offices in the Shubert Theater in New York City were alongside an open passage-way now known as Shubert Alley, in the heart of the Broadway theater district. JACOB J. SHUBERT(1880-1963) "The man who produced a thousand shows." Introduced Al Jolson, Eddie Cantor, Fanny Brice, Ray Bolger, and many others. Jacob J. Shubert was naturalized American theatre owner/operator and producer and a member of the famous theatrical Shubert family. Born in Neustadt, Poland (now Kudirkos Naumiestis, Lithuania), he was the sixth child and third son of Duvvid Schubart and Katrina Helwitz. Jacob was still a small child when the family emigrated to the United States, settling in Syracuse, New York where a number of Jewish families from their hometown were already living. His father's alcoholism kept the family in difficult financial circumstances and both he and his older brothers received little in the way of education and had no choice but to go to work at a young age. With borrowed money, he and brothers Sam and Lee Shubert eventually embarked on a business venture that led to them becoming the successful operators of several theatre houses in upstate New York. The Shubert brothers decided to expand their theatrical operations and in 1900 Sam and Lee Shubert moved to New York City leaving Jacob at home to manage their existing theatres. In New York, the elder Shuberts laid the foundations for what was to become the largest theatre empire in the 20th century including Broadway's Winter Garden and Shubert Theatres. However, in 1905 Sam Shubert was traveling to Pittsburgh, Pennsylvania on business when the passenger train he was on collided with several freight cars and he died as a result of injuries sustained in the train wreck. His death changed the brother's business dynamics and Jacob assumed a much larger role. Together, although often feuding, Jacob and Lee Shubert overcame the stranglehold on the industry by the Theatrical Syndicate's monopoly under Abe Erlanger and Mark Klaw to build the largest theatre empire in the 20th century. Jacob Shubert's son, John, took over as head of the operations in the 1950s but died unexpectedly in 1962 and a year later, Jacob died around age 84. He was interred in the family plot in the Salem Fields Cemetery in Brooklyn, New York. History from Wikipedia and OldCompany.com (old stock certificate research service)