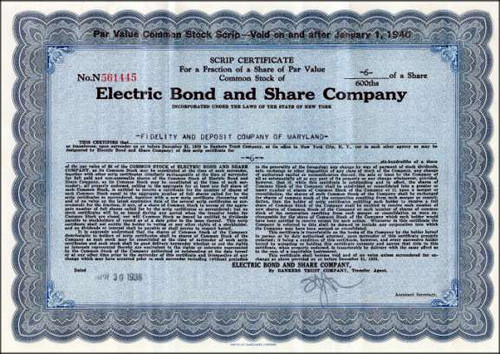 Beautifully engraved uncancelled certificate from the Electric Bond and Share Company issued no later than 1939. This historic document was printed by the American Banknote Company and has an ornate border around it and is handsigned. This items is over 75 years old. In 1905, the Electric Bond and Share Company (EBASCO) was formed by the General Electric Company as a major holding company for gas and electricity operations, while in control of Thomas A. Edison. By the late 1920's, holding companies were organized for no other purpose than to acquire utilities for the purpose of getting their security business. The Electric Bond and Share Company, known as EBASCO, was the largest, with control of 15 percent of the nation's output of electricity, including 53 percent of the electric load in the Pacific Northwest. In order to enhance the companies' return on investment, electricity users ended up paying high charges for nominal services. EBASCO was also the leader in the financing, construction and operation of electric and gas utilities in the United States and South America. However, the U.S. Government forced it to restructure itself under the Public Utility Holding Company Act of 1935. Later EBASCO provided engineering consulting and construction services. Among other projects EBASCO designed nuclear power plants. EBASCO was sold to Raytheon in 1993 and became part of a Raytheon subsidiary, United Engineers and Constructors. Ebasco (EBS) was included in Dow Jones Utility Average from 1938 to 1947. Ebasco Services was one of major US Architect-Engineers, coordinated design of many Nuclear Power Plants both in USA and outside including Fukushima Daiichi Nuclear Power Plant (units 1, 2 and 6). History from Encyberpedia, Wikipedia and OldCompany.com (old stock certificate research service)