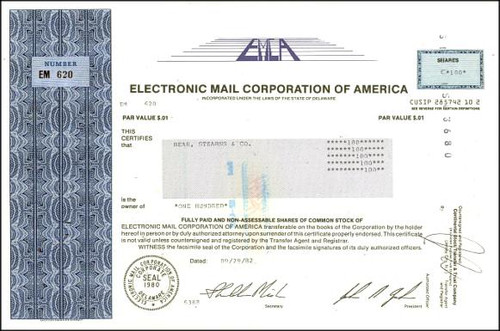 Beautifully engraved Certificate from the Electronic Mail Corporation of America issued in 1982. This historic document was printed by the American Banknote Company and has an ornate block border with a vignette of the company's logo. This item has the printed signatures of the company's officers and is over 19 years old. This is the earliest reference to electronic mail we have seen in a stock or bond certificate. Electronic Mail Corporation of America (EMCA) began in 1980 and began revenue service in 1984. Their first four years were spent on R&D of approximately $7 million. EMCA was focusing on large groups with a common interest. This included Fortune 500 Companies but not exclusively. EMCA'd goal was to link all networks public and private. Their service was called GEMSERVICE. GEMSERVICE accommodated all line types, line speeds from 50 to 19200 bps; character sets of ITA#2, ASCII, and EBCDIC; link level protocols of X.25, X.75, HDLC, 2780, 3780, 3270; and the spectrum of asynchronous protocols. The networks that were available included AT&T, MCI, GTE, SBS, RCA, United Telecommunication, McDonnell-Douglas, Western Union, and the telex service providers. They did all of this through a network control facility located in their office in Connecticut. If you wanted to deliver a message to someone that did not have a computer or terminal connected to any of the above they would have sent the message via mail or courier service, depending on the priority. They accomplish all this by storing all the communication parameters needed to get from one point to another in a database. They also created all the electronic bridges from one system to another by establishing their own mail box or boxes on all the systems. Their customers then use a menu driven system to send a message to someone, and all they have to specify is who the message goes to and the priority. The system had its limitations while it could upload and download messages, it could not work with an online database. This system was a major step to a global network and the Internet.