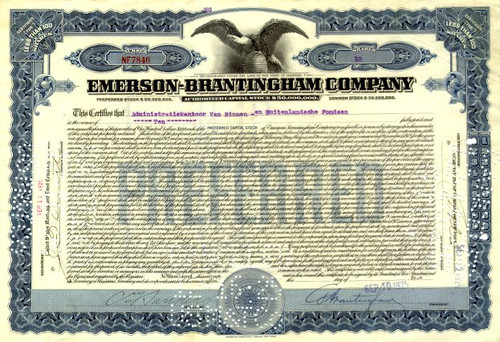 Beautifully engraved Certificate from the Emerson Brantingham Company issued in 1925. This historic document was printed by the American Banknote Company and has an ornate border around it with a vignette of an eagle. This item is handsigned by he company's president, Charles S. Brantingham and is over 80 years old. The Emerson-Brantingham Company, as a "name" began in 1909, but its' roots are firmly entrenched back to the 1850's. This was the beginning of the mechanized revolution that forever changed farming in America. John H. Manny was what many would refer to as an ambitious tinkerer. He was obsessed with helping his father make farming easier. 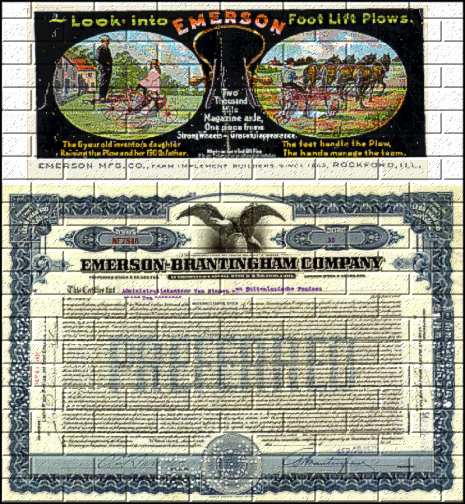 One of the hardest chores about the farm in those days was harvesting wheat. Manny, along with several other inventors including Cyrus McCormick were racing to see who could "build a better mousetrap" that would greatly reduce the manual labor involved in the mowing, gathering, tying, and stacking of the wheat from the fields. Manny, along with his father, Pells Manny, had developed a horse drawn machine that did just that. His successes came fast and convincing. In 1852, his machine won the coveted Gold Medal for Achievement at competitive trial in New York. Because of both the supply of natural resources and proximity to the growing agricultural heartland, Manny moved his operation to Rockford, Illinois. There he was introduced to the Talcott brothers; Wait and Sylvester. They were both impressed with Manny's integrity and enthusiasm and bought in to his invention as investors. The company became J.H. Manny and Company in 1854 and soon was heralded as the largest manufacturer of reapers in the world. Later that same year, financier and business leader Ralph Emerson (cousin of Ralph Waldo) joined the firm. They saw mechanical brilliance with no financial guidance and quickly turned the company into a very profitable venture. During this time, Cyrus McCormick decided that HIS machine was being "infringed" upon and filed a suit against Manny. The most significant aspect of this part of the history is that Manny's lawyer was a self taught country lawyer from Springfield, IL., a Mr. Abe Lincoln. Even more coincidently, McCormick's lawer was a Mr. Stanton. Mr. Stanton eventually became Secretary of War Mr. Stanton under President Lincoln. The trial ended with a victory for Lincoln and Manny. Unfortunately, Manny took ill and passed away in 1856 at the tender age of 30. After Manny's death, the company changed its name to Talcott, Emerson, and Co. and continued to build on the 28 plus patents that Manny had left. The company grew at a high rate and several years later became the Emerson Manufacturing Company. Emerson, always eager to expand, went out and sought those individuals, both technical and financial, who could take his company to the next level of performance. One of those individuals was Charles S. Brantingham, who up until that time had been applying his business savvy at the Nelson Knitting Company in Rockford. He brought a much broader business approach to the Emerson Company. His reputation was as a ruthless competitor, a fair employer, and a model citizen. He had visions of a global business that would supply the world with agricultural equipment. Part of that vision was to expand rapidly. One way to do that was to "not reinvent the wheel". He needed a company that produced high quality steam engines. He acquired the Geiser Mfg. Co. in Pennsylvania. He needed to expand the tillage business, so he jumped on the opportunity to acquire the Osborne Co. Osborne was in the process of being divested from the International Harvestor Co. because of a monopoly suite with the government. He saw a need for carrying and hauling. He acquired the Pontiac Buggy Co. and the Newton Wagon Works. There was a demand for more auxiliary gas engines so he obtained the Rockford Gas Engine Co. Capitalization was increasing at a record rate. His last acquisition was the Big Four Tractor Co. from Minneapolis, MN. This company built huge tractors that were used to break and plow huge tracts of land in the west as farming moved in that direction. Brantingham was able to acquire Big Four fairly cheaply because the demand for the monster tractors (these were machines whose rear wheels alone stood over 8 feet tall!) was dwindling rapidly. With the uncertain financial situation in the country and with the move to smaller, more efficient farms, the need for these beasts became less and less. And with the demise of the steam engine, EB already had one division in serious financial trouble. Now their two biggest money makers ..... WEREN'T! A close neighboring company was lurking in the wings. JI Case out of Racine, WI watched closely as EB fell further and further behind. Their particularly keen interest was in the plant and facilities and the 28 vital patents that EB held. Finally, in 1928 (November), the Emerson Brantingham Co. fell to the hands of Case. For what it's worth, Emerson Brantingham was one of the last of over 800 implement companies to fall prey to the times. EVOLUTION OF THE EMERSON-BRANTINGHAM CO. J. H. Manny & Co. 1852 Manny & Co. 1854 Talcott, Emerson, & Co. 1856 Emerson & Co. 1860 Emerson & Talcott 1871 Emerson Mfg. Co. 1895 Emerson-Brantingham Co. 1909 SOLD TO JI CASE November 1928 AQUISITIONS OF THE: EMERSON-BRANTINGHAM CO. (Incorporated 1909) Pontiac Buggy Co. (Pontiac, MI) August, 1912 La Crosse Hay Tool Co. (Chicago Heights, IL) April, 1912 Reeves and Company (Columbus, IN) August, 1912 Geiser Manufacturing Co. (Waynesboro, PA) August, 1912 Rockford Gas Engine Works (Rockford, IL) August, 1912 Gas Traction Co. (Big-4) (Minneapolis, MN) August, 1912 Newton Wagon Co. (Batavia, IL) August, 1912 American Drill Co. (Marion, IN) August, 1912 Osborne Harvesting Equipment Co. (Springfield, IL) 1918