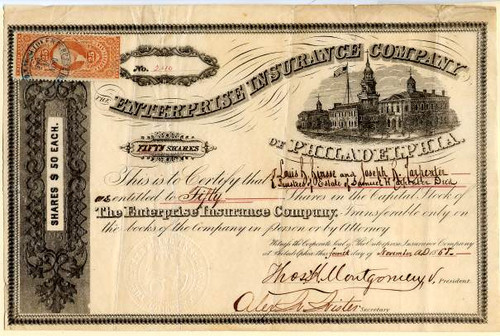 Beautiful uncancelled stock certificate from the Enterprise Insurance Company of Philadelphia issued in 1868. This historic document has an ornate border around it with a vignette of City Hall. This item has the signatures of the Company's President, Thomas H. Montgomery and Secretary, Alex Twister and is over 142 years old. 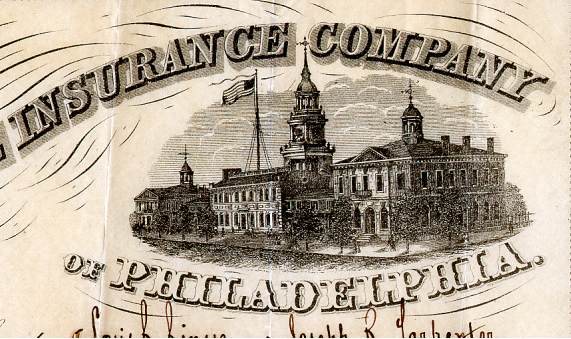 Certificate Vignette
Thomas H. Montgomery, president of the American Fire Insurance Company of Philadelphia, was born in that city February 23, 1830, the son of the Rev. James Montgomery, D.D. At the age of seventeen years he entered the drug house of Charles Ellis & Co., and in 1851 was graduated from the Philadelphia College of Pharmacy. After some years in the drug business he became interested in the organization of the Enterprise Insurance Company of Philadelphia, of which he was successively secretary and vicepresident. The company made an assignment after the Chicago fire. In April, 1872, Mr. Montgomery was appointed general agent of the National Board of Fire Underwriters, and conducted its operations through that famous episode in its career in which it rated the fire insurance business of the country. He resigned May I, 1878, and after a short service with the Insurance Company of North America at it home office was elected vice-president of the American Fire, and on the death of Mr. Maris, in 1882, succeeded to the presidency. Mr. Montgomery is distinguished as an antiquarian and author, and has written a valuable history of the venerable Insurance Company of North America, and a history of the early years of the University of Pennsylvania, besides contributing to historical magazines.