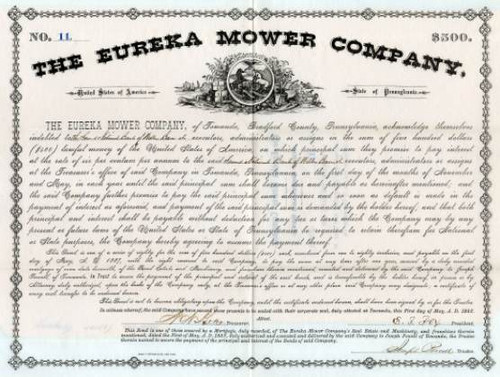 Beautifully engraved RARE certificate from the Eureka Mower Company issued in 1882. This historic document was printed by Ghas. F. Ketcham & Company and has an ornate border around it with a vignette of two horses on a seal which sits in front of various farm equipment. This item is hand signed by the Company's President ( E. T. Fox ), Treasurer ( Nathaniel N. Betts ) and Trustee ( Joseph Powell ) and is over 124 years old. This is the first time we have seen or offered anything from this company. The certificate was folded for storage and is in excellent condition. 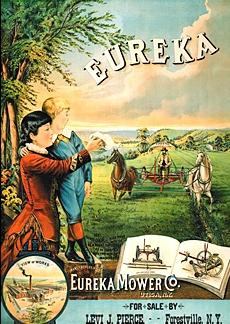 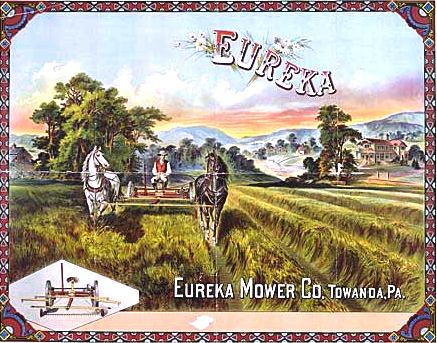 Early Eureka Advertising Card for illustrative purposes
The Eureka Mower Company was organized in 1873, with a capital of $100,000. The original officers were S. D. Madison, president; Joseph Powell, treasurer; W. G. Tracy, deputy treasurer and secretary. The company had purchased their premises on Main Street formerly occupied by O. D. Bartlett'as a foundry and machine-shop. The company only took possession of their shops in March, 1873. On the 20th of May the first machine (Wilber's patent direct draft Eureka mower) was completed. The works consisted of a main building, of brick, three stories high, 75 by 90 feet, and a two story frame building, 45 by 70 feet. The motive power is steam POWELL, Joseph, a Representative from Pennsylvania; born in Towanda, Bradford County, Pa., June 23, 1828; completed preparatory studies; engaged in mercantile pursuits; president of the First National Bank of Towanda 1870-1889; elected as a Democrat to the Forty-fourth Congress (March 4, 1875-March 3, 1877); unsuccessful candidate for reelection in 1876 to the Forty-fifth Congress; appointed special deputy collector of the port of Philadelphia in 1885 and served four years; sheriff of Bradford County 1889-1893; died in Towanda, Pa., April 24, 1904; interment in Oak Hill Cemetery. History from congressional biographical website and H. C. Bradsby, 1891.