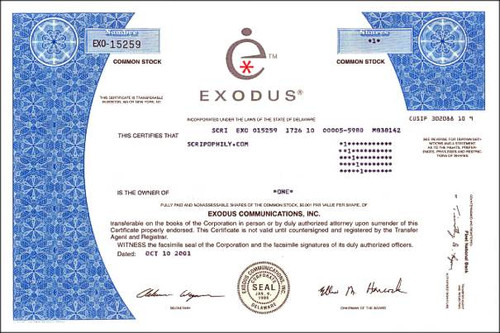 Beautifully engraved Certificate from the Exodus Communications issued in 2001. This historic document was printed by the Security Columbian Banknote Company and has an ornate border around it with a vignette of the company's logo. This item has the printed signatures of the company's officers. 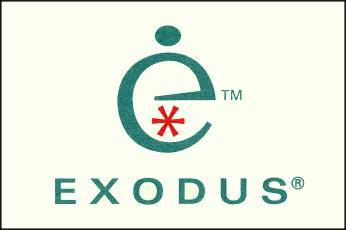 Certificate Vignette
Exodus Communications was an Internet hosting service and Internet service provider to dot-com businesses. It went broke, along with many of its customers, during the bursting of the dot-com bubble. It declared Chapter 11 bankruptcy in 2001 and was purchased by Cable and Wireless in November 2001. Exodus was founded by K.B. Chandrasekhar and B.V. Jagadeesh in 1994, originally named Fouress, Inc.. Fouress then merged into Exodus Communications in 1996. Exodus Communications was the first company to offer colocation services and enterprise-level Web Hosting. It was based in Santa Clara, California. It completed an IPO on the NASDAQ in March 1998, the stock symbol was (NASDAQ: EXDS). The original headquarters was located on Benicia Ave in Sunnyvale, California. The final Exodus HQ was at 2831 Mission College Drive in Santa Clara, (now one of Yahoo's campus). K.B. Chandrasekhar served as CEO from inception until September, 1998. He was the Chairman until September 2000. B.V. Jagadeesh served as VP Engineering and CTO from inception until July 2000. In March 1998, Ellen Hancock, a former Vice President at IBM and CTO of Apple Computer, was recruited as President. She assumed the CEO post in September 1998. She resigned September 10, 2001. She was followed by Bill Krause as CEO on September 1, 2001. Exodus filed for bankruptcy shortly thereafter on September 26, 2001. Once the Company assets were sold off to Cable and Wireless, Bill Austin took over as the CEO. Sam Mohammad was the Vice President of Sales since early 1997 and grew the revenues from 2M to over a billion dollars in 5 years. Richard 'Dick' Stoltz was CFO since 1995. Bob Sanford became VP Operations in 1997. There were other key members of the team such as Barry James Folsom who was consultant VP Marketing - one of the key folks who helped set the direction in 1997. Robert Bowman helped build the backbone. Both Prabakar Sundarajan and Rob Bowman joined the company in 1995. Prabakar was promoted to CTO in 2000. In 1997, Greg Laino, Ricard Santos, Dave Asprey, Dave Pirrocco, Hector Pulanco, and Kumar Nagaraja launched the Exodus Professional Services group, which eventually grew to more than 1500 employees through organic growth and multiple acquisitions of service firms, including Cohesive, Arca, and AIS. Bill Yeack came in to run the professional services team after the Cohesive acquisition. Dave Asprey went on to create the "Managed Web Hosting" service. A key advisor, early investor and board member was Peter A. Howley. While lecturing at Stanford University on "The Centex Story", he was approached and quickly recruited by Exodus CEO Chandrasekhar. Howley was Co-founder/CEO of Centex Telemanagement (CNTX), a legendary company in telecom.. As a management consultant to top management and the board Howley provided critical advice. These initially included actions to immediately accelerate revenue and customer growth, as well as steps to building a great service and customer oriented company. He envisioned Exodus as the EDS of the Internet world. He served from Exodus's earliest days until he resigned from the board in June, 2000. History from Wikipedia and OldCompany.com (old stock certificate research service).