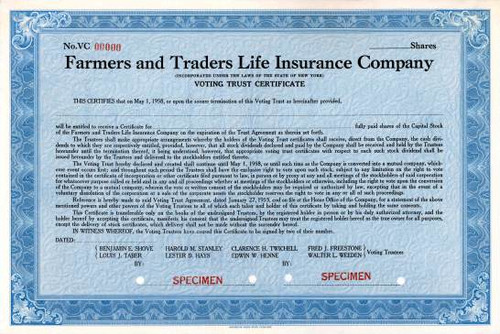 Beautifully engraved SPECIMEN certificate from the Farmers and Traders Life Insurance Company. This historic document was printed by the American Banknote Company in 1953 and has an ornate border around it. Farmers and Traders was founded by members of the Grange, an agricultural fraternal organization which held a large membership of all farm people during the early 20th Century. Grange members were predominantly isolated from many of the services available in the cities. City-based insurance agents were unlikely to take the time to venture far from their offices into an America still largely rugged and rural and lacking the amenities of cosmopolitan life. In 1914, in an effort to provide access to life insurance for its members, the National Grange began their own life insurance company, which was also open to the general public. Farmers and Traders Life set up a home office in Syracuse, New York in 1914, and after a number of years, established its current office at 960 James Street in Syracuse. Farmers and Traders Life currently conducts its business through approximately 1,600 Agents in 29 states and the District of Columbia.