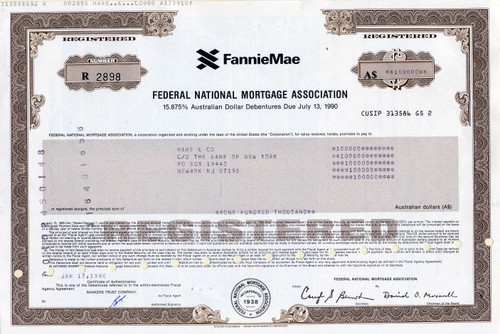 Beautifully engraved unusual 15.875% Australlian Dollar Debenture certificate from the Federal National Mortgage Association dated 1990. This historic document has a vignette of the company's logo. This item has the printed signatures of the Company's Chairman of the Board (David O. Maxwell) and Secretary and is over 18 years old.

Certificate Vignette
Fannie Mae was a New York Stock Exchange company and the largest non-bank financial services company in the world. It operated pursuant to a federal charter and is the nation's largest source of financing for home mortgages. Fannie Mae was working to shrink the nation's "homeownership gaps" through a $2 trillion "American Dream Commitment" to increase homeownership rates and serve 18 million targeted American families by the end of the decade. Since 1968, Fannie Mae has provided over $4.8 trillion of mortgage financing for more than 52 million families. On September 7, 2008, Federal Housing Finance Agency (FHFA) Director James B. Lockhart III announced pursuant to the financial analysis, assessments and statutory authority of the FHFA, he had placed Fannie Mae and Freddie Mac under the conservatorship of the FHFA. FHFA has stated that there are no plans to liquidate the company. The announcement followed reports two days earlier that the Federal government was planning to take over Fannie Mae and Freddie Mac and had met with their CEOs on short notice.[17][18][19] Under plan announced September 7, 2008, the federal government, via the Federal Housing Finance Agency, placed the two firms into conservatorship, and for each entity, dismissed the chief executive officer, and dismissed the present board of directors, and caused the issuance to the Treasury new senior preferred stock and separately warrants for common stock amounting to 79.9% of each GSE. The value of the common stock and preferred stock to pre-conservatorship holders was be greatly diminished by the suspension of future dividends on previously outstanding stock, in the effort to maintain the value of company debt and of mortgage-backed securities. The authority of the U.S. Treasury to advance funds for the purpose of stabilizing Fannie Mae, or Freddie Mac is limited only by the amount of debt that the entire federal government is permitted by law to commit to. The July 30, 2008 law enabling expanded regulatory authority over Fannie Mae and Freddie Mac increased the national debt ceiling US$ 800 billion, to a total of US$ 10.7 Trillion in anticipation of the potential need for the Treasury to have the flexibility to support the federal home loan banks. History from Wikipedia and OldCompanyResearch.com (old stock certificate research service).