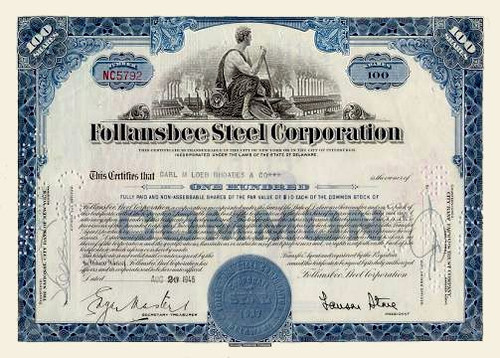 Beautiful certificate from the Follansbee Steel Corporation issued in 1948 or earilier. This historic document was printed by Security Banknote Company and has an ornate border around it with a vignette of an allegorical man in front of the steel company. This item has the printed signatures of the Company's President and Secretary and is over 58 years old.

Certificate Vignette
Follansbee Steel Corporation dates back to 1812 when James Park established a business at Pittsburgh to deal in block tin, ingot copper, spelter, antimony, sheet zinc, sheet iron, and tinplate. At the death of Mr. Park, the business was conducted by the firm of James B. Scott and Company and it was in this firm that the elder Follansbee brothers became partners in the late 1870s. This partnership continued until the death Mr. Scott in 1894 when the business was incorporated as Follansbee Brothers and remained as such until 1940 when it was reorganized as Follansbee Steel Corporation. Through the efforts of D.J. Sinclair of Steubenville, Ohio, Follansbee Brothers Company purchased land in Brooke County in 1902. Mr. Sinclair entered into an agreement to build a bridge across the Ohio River, to build a streetcar line from Steubenville, Ohio, to Wellsburg, West Virginia. When finally completed in 1904, the Follansbee Brothers' plant was modern in 1940 the company was reorganized as Follansbee Steel Corporation. The facilities of the Sheet Metal Specialty Division, a steel fabricating plany, were devoted to war needs during World War II. In December 1954, Follansbee Steel was purchased by the Louis Berkman Company. Name changed to Union Chemical & Materials Corp. in 1954 and merged into Vulcan Materials Co. on 12/31/57.