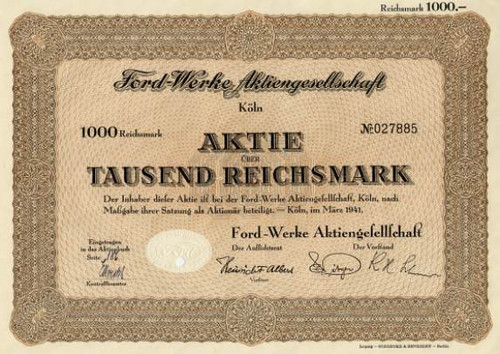 Beautifully engraved certificate from Ford-Werke Aktiengesellschaft issued in March 1941. This historic document was printed by Giesecke & Devrient and has an ornate border around it with an elaborate watermark. This item has the printed signatures of the Company's officers and is over 63 years old. Henry Ford, the legendary American automobile manufacturer, wwas given the Grand Cross of the Order of the German Eagle by Hitler for their service to the Third Reich: The highest party allocade a foreigner could receive. At this time - 1937 and 1938 - Hitler's rearmament program was already running at full speed. The German subsidiary of Ford Motors, Ford Werke AG had willingly become involved in Hitler's war preparations. Elsa Iwanowa remembers German troops taking her and 2,000 other children from their Russian village during World War II and forcing them to build military trucks at a Ford plant in Germany. Now living in Belgium, Iwanowa is seeking compensation for suffering and unpaid labor from Ford Motor Co. The class-action lawsuit says the automaker reaped "enormous profits" from the work performed for the Nazis. Iwanowa's lawsuit, believed to be the first of its kind against a U.S.-based company, also alleges that senior Ford executives knew that thousands of workers were being abused. The German plant "became an eager, aggressive and successful bidder for forced laborers" after a Nazi labor official encouraged German industries to use such workers to meet quotas, according to the lawsuit filed Wednesday in U.S. District Court in Newark. Ford issued a statement acknowledging slave labor was used at the plant. But it said historians who wrote a company history in the 1950s determined the company lost contact with its German operations before the United States entered the war and only regained control seven years later. Still, the company will look further into the allegations, Ford corporate secretary John Rintamaki said. Up to 10,000 men, women and children were pressed into working at Ford Werke A.G. in Cologne during the war, said Melvyn Weiss, the attorney who filed the lawsuit. He said the vast majority were non-German and were not Jews. The first forced labor brought to the plant were French POWs in 1941, and by 1943 half the work force was slave labor, the suit said. "By 1944 Russians, Ukrainians, Italians, and Belgian civilians, as well as concentration camp inmates from Buchenwald, were laboring at Ford's Cologne plant under utterly barbarous conditions," it said. Laborers who became ill were sent to the Buchenwald concentration camp and were replaced by other concentration camp inmates, the lawsuit said. Workers who failed to meet production quotas were beaten with rubber clubs and escape attempts were punished by execution or transfer to Buchenwald, the suit said. Ford Werke doubled its profits by 1943 because it did not have to pay wages and eventually produced 60 percent of the 3-ton tracked vehicles for the German forces, the lawsuit said. The lawsuit said a "personal friendship" between Henry Ford and Adolf Hitler led to favorable treatment of the company even after the United States entered the war. "The plant was left unharmed. The person who Henry Ford put in as the head of the plant stayed in," said Weiss, who also is involved in claims against Swiss banks by Holocaust victims seeking assets seized by the Nazis. He believes the lawsuit is the first to seek compensation from an American company for alleged actions during the war. The lawsuit so far has only one plaintiff: Iwanowa, of Antwerp, Belgium, who said she was taken from her birthplace of Rostov, Russia, on Oct. 6, 1942, with other youngsters. Others may join the suit. Eventually trucked to the Ford Werke, the children slept in triple bunks without bedding and got two meals a day. Until 1945, she drilled holes into motor blocks of military trucks and did other heavy labor without pay, the lawsuit said. "The work was extremely hard and I am still traumatized today," Iwanowa told the BBC last month. "The foreman was like a wild animal." History from Learning from History Website