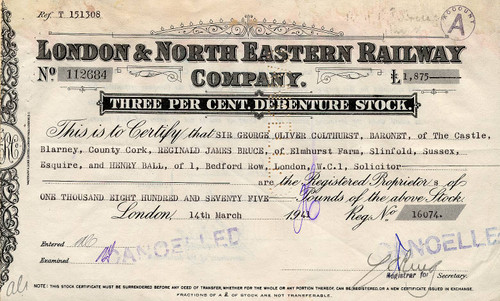 Beautiful certificate from the London & North Eastern Railway Company issued in 1941. This historic document has an ornate border around it with the company name centered on top. This item has the signatures of the Company's Registrar, and is over 68 years old.

Certificate Vignette
The London and North Eastern Railway (LNER) was the second-largest of the "Big Four" railway companies created by the Railways Act 1921 in Britain. It existed from 1 January 1923 until nationalisation on 1 January 1948, when it was divided into the new British Railways' Eastern Region, North Eastern Region and partially the Scottish Region.