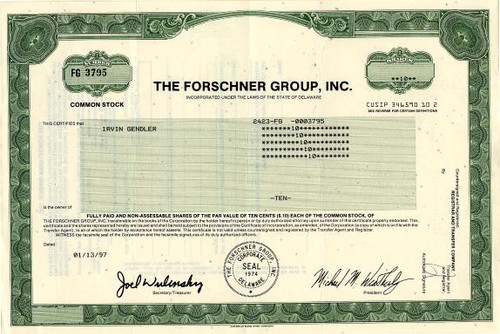 Beautiful certificate from the Forschner Group, Inc issued in 1997. This historic document was printed by American Banknote Company and has an ornate border around it. This item has the signatures of the Company's President and Secretary and is over 10 years old. April 17, 1996 The Forschner Group, Inc. which has carried the Forschner name since its founding in 1855, announced a proposal to change its name to Swiss Army Brands, Inc. The company, which is the exclusive United States, Canadian and Caribbean marketer of Victorinox(R) Original Swiss Army(TM) Knives and its own line of Swiss Army(R) Brand Watches, said that the name change is designed to reinforce its commitment to its substantial investment in, and the recognition of, the quality of its products.