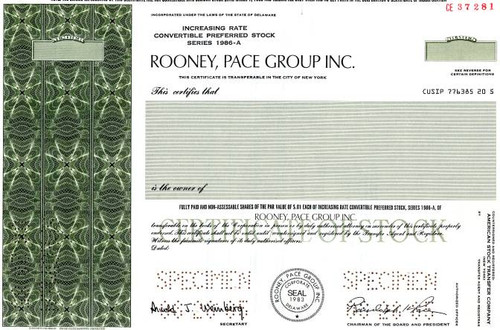 Beautifully engraved certificate from Rooney, Pace Group Inc. printed in 1985. This historic document was printed by the Security-Columbian United States Banknote Corporation and has an ornate border around it. This item has the printed signatures of the Company's Chairman of the Board and President, Randolph Pace and Secretary, Arnold J. Weinberg, and is over 26 years old. Rooney Sentenced, Fined in Tax Case June 18, 1988 | From Reuters NEW YORK -- A former principal of broker Rooney, Pace Inc., which agreed last year to leave the securities industry after being charged with violating public offering laws, was sentenced on Friday to four months in prison on income tax evasion charges. Patrick Rooney was also fined $50,000, ordered to serve 300 hours of community service and was given three years' probation. He was released on his own recognizance. He was convicted in March after a 2 1/2-week jury trial on charges of conspiracy and filing a false income tax return for 1983. The Manhattan U.S. attorney's office alleged that Rooney had written a $50,000 check to the American Cancer Society, but that $45,000 was returned to him in an income tax evasion scheme. Rooney was charged with deducting the entire $50,000 as a charitable contribution. He had faced a possible maximum eight-year prison term and a $110,000 fine. Rooney Pace was once a major player in the business of initial public offerings. It agreed to leave the securities business after the Securities and Exchange Commission charged last November that the firm broke federal laws in three offerings it underwrote. At the time, the SEC also suspended Randolph Pace, chairman of the firm and of its parent company, Rooney Pace Group Inc., from the securities business for nine months. It also restricted him from becoming a principal or supervisor in another securities firm for five years. About Specimen Certificates Specimen Certificates are actual certificates that have never been issued. They were usually kept by the printers in their permanent archives as their only example of a particular certificate. Sometimes you will see a hand stamp on the certificate that says "Do not remove from file". Specimens were also used to show prospective clients different types of certificate designs that were available. Specimen certificates are usually much scarcer than issued certificates. In fact, many times they are the only way to get a certificate for a particular company because the issued certificates were redeemed and destroyed. In a few instances, Specimen certificates were made for a company but were never used because a different design was chosen by the company. These certificates are normally stamped "Specimen" or they have small holes spelling the word specimen. Most of the time they don't have a serial number, or they have a serial number of 00000. This is an exciting sector of the hobby that has grown in popularity over the past several years.