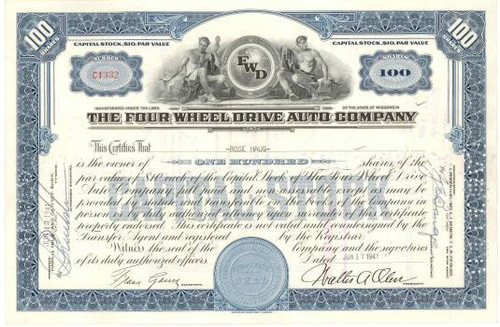 Beautifully engraved certificate from the Four Wheel Drive Auto Company issued no later than 1948. This historic document was printed by the American Banknote Company and has an ornate border around it with a vignette of two allegorical men by the company logo. This item has the printed signatures of the Company's President and Secretary and is over 56 years old.

Certificate Vignette
The first US four wheel drive vehicle, was built 1911 by the Four Wheel Drive auto company (FWD) . The company was formed by Zachow and Besserdich, and the latter was subsequently involved in forming a company that took its name from the town of Oshkosh and manufactured 4x4 trucks. FWD supplied 4x4 trucks to both the British and US armies during World War One The first world war gave FWD's fortunes a boost with many of their 4X4 trucks being used by the US and British armies. The truck pictured (right) is an FWD model B of 1917, serial number 3002, held by the Imperial War Museum (UK). Forward control was required to give the drivers a better view of the road close to the front wheels.