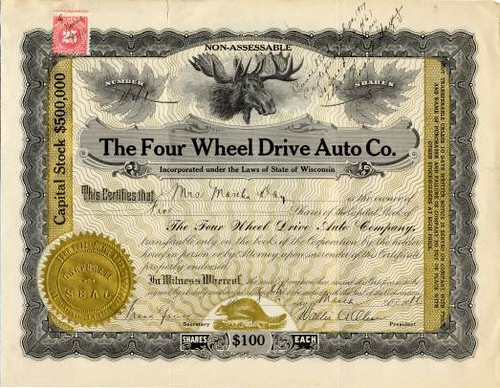 Beautifully engraved certificate from the Four Wheel Drive Auto Co. issued in 1919 or earlier. This historic document has an ornate border around it with a vignette of moose head. This item is hand signed by the Company's President and Secretary and is over 101 years old. 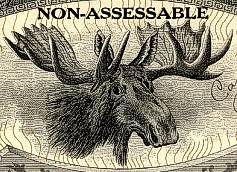 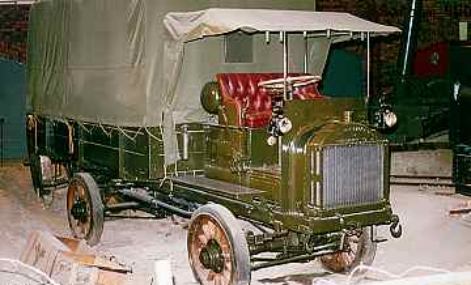 1916 WWI Four Wheel Drive Auto Co. Truck
The first ever four wheel drive car (as well as hill-climb racer), the so-called Spyker 60 HP, was built in 1903 by Dutch brothers Jacobus and Hendrik-Jan Spijker of Amsterdam. Designs for four wheel drive in the US, came from the Twyford company of Brookville, PA in 1905. The first US four wheel drive vehicle was built in 1911 by the Four Wheel Drive auto company (FWD) of Wisconsin. FWD would later produce over 20,000 of its four wheel drive Model B trucks for the British and American armies during World War I. Bugatti created a total of three four wheel drive racers, the Type 53, in 1932, but the cars were legendary for having poor handling. It was not until "go-anywhere" vehicles were needed for the military that four wheel drive found its place. The Jeep, originally developed by American Bantam but mass-produced by Willys and Ford, became the best-known four wheel drive vehicle in the world during World War II. Willys (since 1950 owner of the Jeep name) introduced the CJ-2A in 1945 as the first full-production four wheel drive passenger vehicle. However, it was not until Jensen applied the Formula Ferguson four wheel drive system to their 1966 Jensen FF that the system was used in a production sports car, but with a total of 320 build units this did not sell in appreciable numbers. The first manufacturer to develop four-wheel drive for road-going cars was Subaru, who introduced the mass-produced 4WD Leone in 1972. This model eventually became the best-selling 4WD car in the world. Audi introduced the first permanently all-wheel driven high volume road-going car, the Audi quattro, in 1980. Audi's chassis engineer, JÃ¶rg Bensinger, had noticed in winter tests in Scandinavia that a vehicle used by the German Army, the Volkswagen Iltis, could beat any high performance Audi. He proposed developing a four-wheel drive car, soon used for rallying to improve Audi's conservative image. This feature was also extended to Audi's production cars and is still available nowadays. Some of the earliest mid-engined four wheel drive cars were the various road-legal rally cars made for Group B homologation, such as the Ford RS200 made from 1984-1986. In 1989 niche maker Panther Westwinds created a mid-engined four wheel drive, the Panther Solo 2. Today, sophisticated all wheel drive systems are found in many passenger vehicles and most exotic sports cars and supercars. History from Wikipedia.