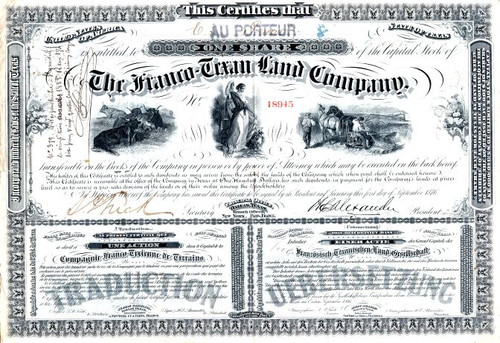 Beautiful certificate from the Franco-Texan Land Company issued in 1876. This historic document was printed by Continental Bank Note Company and has an ornate border around it with a vignette of a group of cattle, an allegorical women, and men with horses working their crops. This item has the signatures of the Company's President, H. E. Alexander and Secretary, S. Pinkney Tuck and is over 138 years old. 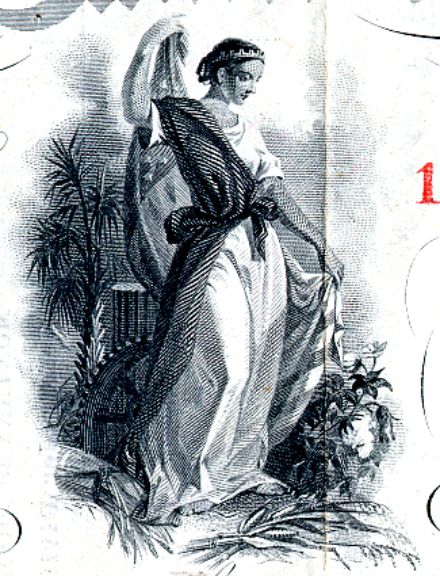 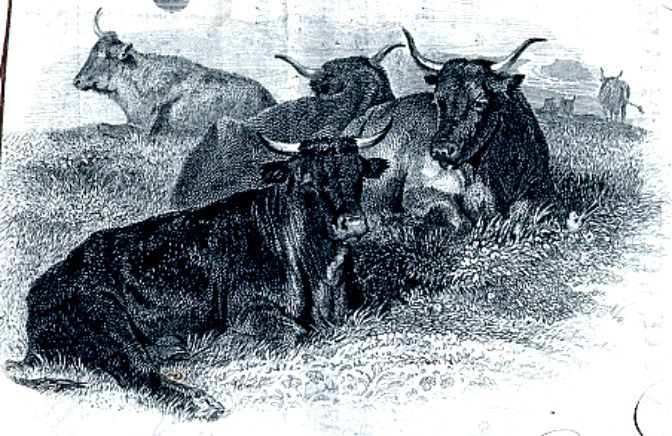 Certificate Vignette
FRANCO-TEXAN LAND COMPANY. The Franco-Texan Land Company, chartered under the laws of Texas on August 4, 1876, owned about 600,000 acres of land in Parker, Palo Pinto, Stephens, Callahan, Shackelford, Mitchell, Taylor, Nolan, Jones, and Fisher counties. The company had its origin in a land grant made by the Texas legislature to the Memphis, El Paso and Pacific Railroad. The charter, granted in 1856, authorized the building of a railroad from a point on the eastern boundary of the state between Sulphur Fork and the Red River to a point on the Rio Grande opposite or near the city of El Paso. The state donated sixteen sections of 640 acres each for every mile of road constructed and placed in running order, on the completion of a minimum of ten miles, and eight sections per mile for the grading of a minimum of twenty-five miles of roadbed. By 1861 the Memphis, El Paso and Pacific directors, originally a group of sincere and earnest Texans, had surveyed the center line of the road as far as the Brazos River and graded fifty-five miles on which they were ready to lay the track. The Civil Warqv suddenly halted all operations, and the company could do no more than retain its corporate form for the duration of the war. In 1866 the legislature passed a relief act that extended the limitations on the company's contract for ten years. Interest revived, and the Texas directors, in search of capital, brought John Charles FrÃ©mont into the company. FrÃ©mont, envisioning a transcontinental road on the thirty-second parallel, beginning at San Diego and connecting with the East at Memphis, took control and promptly executed three mortgages secured by the road itself and the land grants yet to be received from the state of Texas. FrÃ©mont sold his securities in France and collected some $5 million after he had succeeded, by highly questionable methods, in getting his "puffed-up" bonds quoted on the Paris Bourse. Because the "French Bond Scandal" was widely publicized at home and abroad, and because little of the money was spent on the railroad, Congress refused to grant FrÃ©mont a transcontinental charter. He therefore compromised with the rival Texas and Pacific Company, which, since it had to have the Memphis, El Paso and Pacific to get across Texas, agreed to buy the embryonic railroad and take over its liens. Ultimately FrÃ©mont was frozen out of the successor company, but the French bondholders did become the owners of the Texas land that secured their bonds, subject, however, to rules and regulations imposed by John A. C. Gray, the agent who put the Memphis, El Paso and Pacific into receivership and sold it to the Texas and Pacific. The French bondholders received thirteen acres of land for each $100 bond, and this land constituted the capital stock of the Franco-Texan Land Company. The incorporators were H. E. Alexander and S. Pinkney Tuck of New York, and Claiborne S. West and Harry C. Withersqv of Austin, Texas. Tuck, the company's secretary, traveled to Weatherford, Texas, and began the sale of land in 1878. Henry P. du Bellet, vice secretary residing in Paris, staged a coup in which the New York officers were ousted and Sam H. Milliken of Weatherford was elected president. Du Bellet then came to Texas and had a hand in the company's affairs until he too was ousted. Successive presidents were V. G. Frost of Palo Pinto, A. Chaptive of Paris, France, R. W. Duke and A. J. Hood of Weatherford, Texas, and George P. Levy of Paris, France. With the gradual increase in the value of Texas land, the Franco-Texan Land Company developed into something of a bonanza for the French and American directors, who bought stock certificates for a few cents on the dollar and conspired to riddle the company's coffers. The losers were the French peasants who had invested their life savings in the Memphis, El Paso and Pacific bonds. In 1896, after years of local rivalry and dissension, the charter of the Franco-Texan Land Company expired by limitation. On request, the legislature allowed the company three additional years to liquidate its assets and conclude its business. History from The Handbook of Texas Online and Oldcompany.com